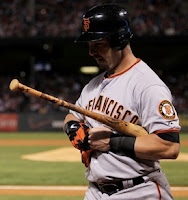 I sing the song of Aaron Rowand, the guy who makes you cringe just by squaring up in the batter's box and manages to make matters worse more often than not by engaging in a seemingly endless run of futility as a Giant. There are players who deserve $60M contracts, and then there's Aaron Rowand. As one of the true "gamers" in the Show today, I doubt even he would find a reason to disagree, other than the fact that Brian Sabean and the top brass put the offer on the table in the first place. You're only as good as your next paycheck, right? Of course, in the case of Mr. Rowand, that next paycheck comes every two weeks for five long years, and for one bright, shining moment, he was worth every penny to this club. Like many of you, I'm still struggling to fathom why.

Okay, enough bright spots... But seriously, it's not like the guy's been a total waste of space. None of us will soon forget his catch to preserve the penultimate out of Jonathan Sanchez's no-hitter. And of course, there was his late inning shot to give the Giants a come-from-ahead-from-behind victory at Citi Field in May 2010. Without any one regular season victory, the eventual World Series Champions would have been playing golf in October. Thus, it could be said without stuttering that without Aaron Rowand, the Giants would not have claimed the Commissioner's Trophy.

We may be stuck with his ridiculous No. 2 batting stance for another two years — unless the Yankees suddenly have a need for an aging centerfielder who can't hit a slider — and his stat line may have fallen off in each of the past three. But all the while, the man has never complained or showed visible signs of frustration, even as his playing time diminished along with his stats. Whatever the damage to his pride, he kept it to himself, and there is much to be said for that level of professionalism. If class alone were enough to ensure victory, this guy could beat entire teams all by his lonesome. Unfortunately for him, there's a bit more to it than that.

Thanks, Aaron.
Posted by Butch Husky at 4:20 PM