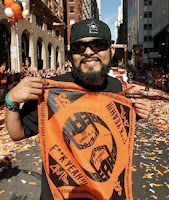 I sing the song of Sergio Romo, quickly becoming one of my favorite Giants. That he's reached such heights in my hierarchy is a testament to his gregarious nature and my immeasurable capacity to forgive — though not necessarily forget. Romo locked down the 7th inning slot in '09 and quickly slid into 8th inning work in 2010 once it was obvious that Jeremy Affeldt was not getting it done like he had the year before. When the Giants rolled into Los Angeles for a mid-April series, Sergio was working on a clean sheet.

On April 18th, I left shortly after the final gavel of the California Democratic Convention and arrived at Chavez Ravine just before first pitch. I'd seen the boys get shellacked on Friday night but missed a three-RBI day from Tim Lincecum in Saturday's 9-0 shutout. I was also working on a three-game schnide in L.A., so it's safe to say I was in need of a W. My old college buddy Barry Zito was in the midst of a perfect opening month, and he twirled a gem that day, getting us deep into the game with a 1-0 lead thanks to a Juan U-RIBE! home run. But when he walked Garrett Anderson with one out in the 8th, Bruce Bochy pointed to the bullpen and brought in Sergio Romo. Joe Torre countered by pinch hitting with Manny Ramirez. On a 1-2 pitch, Romo threw one of his signature pie dish sliders. Only it didn't slide. Instead, it ran right into the sweet spot of ManRam's bat. Game over.

That was the beginning of one of the roughest patches a reliever's ever endured. A week and a half later, Romo took the extra-inning loss in the now-infamous "Jayson Werth Bloop Double" game. Less than a week later, he surrendered a three-run, game-tying jack to Dan Uggla in Florida. Three days after that, he gave up a game-winning two-run shot to future Hall of Famer Rod Barajas at Citi Field in Queens. Two days later, he vultured a W after allowing all three of the runners he inherited from Dan Runzler to score prior to Aaron Rowand's winning home run in one of the most epic games of the season.

You wouldn't fault a guy for getting a little discouraged after a month like that. And maybe Serge was bummin' deep down inside, but he never let it show. He kept the same intensity, the same drive, the same smile beaming out from his über-friendly grill. And by the end of the year, he was back to being one of the most reliable arms in the Giants' pen. In Game 162, Sergio Romo was the penultimate link in a team relief effort that ended with Brian Wilson, as the bullpen saved the day for Jonathan Sanchez and the season for the Orange and Black.

His postseason was certainly one to forget, but not everybody's ready for the brightest of bright lights. I've got a feeling if he gets another chance this year, he'll represent the Left Coast with aplomb. Come what may, it's gonna be a big smile following the ongoing Twitter dialogue he's having with his beard. To quote Andy Baggarly: "Too much awesome."