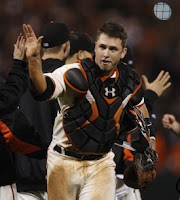 I sing the song of Gerald "Buster" Posey, who came to the Giants as a man and became something greater: a hero. Together with Tim Lincecum, Gerald "Buster" Posey constitutes what I'm gonna guess is the only Golden Spikes battery in the history of the game. That is to say, they're the only pitcher-catcher tandem to have both been named college baseball's Player of the Year. Over 63 games in 2008, Buster hit .463 for the Florida State Seminoles with 29 home runs and 93 RBI. He had 119 hits and walked 57 times. He struck out 29 times. That's very nearly a 2-to-1 walk-to-strikeout ratio. And not only did he don the mask and manage the FSU pitching staff, he was the team's star closer. One day, the dude played all nine positions in a single game. I shit you not.

How Buster Posey slipped to the Giants at 5th in the draft is just as much of a mystery to me as the rationale that caused six GMs to pass on Tim Lincecum in favor of another pitcher. Scanning the interwebs, I recognize all of the names above "Posey, Gerald" on the list of Draft Class '08. But I'll be damned if any of them have made an impact on his big league club like this tall stack of ballplayer from Leesburg, GA. He didn't exactly light up the scoreboard during his cup-a-joe stint in September of '09, but 17 ABs is not much of a sample size, and there wasn't much room for him in the regular rotation with the Giants chasing the Rockies for a playoff berth and Bengie Molina still somewhat decent with a bat. But it was a look, a chance for him to get acclimated with the feel of a pennant race. I have to think that came in handy in 2010.

Speaking of the Year of Our Blessed Contendedness, Buster never had much chance of making the 25-man roster on Opening Day. Right around the time Molina signed on for another season — after failing to coax a sufficient multi-year deal from the Metros — you knew the Golden Child would be starting the season in the Central Valley. But once Bengie came out of the gates struggulin', you also knew it was only a matter of time before a change of the guard would occur. That change began on May 29th when Buster debuted — at first base — and went 3-for-4 with 3 RBI. It ended on July 1, when Molina was traded to the Rangers for Chris Ray. The next day, Buster had two hits including a home run in a Giants loss. The next day, he collected two more hits, back at first base while Eli Whiteside caught Timmy. All he did for the month of July was hit .417 with an OPS of 1.165, 7 HR, and 24 RBI. The rest, as they say, is history.

As has been pointed out elsewhere, the Giants love their Golden Spikes winners — Pat Burrell and Will Clark are a couple other examples. In an age when everybody's looking to go young and draft high school studs they can sign for a modest sum and mold from start to finish, it's good to see a club put a premium on mature, educated, cultured collegiate players. Yes, Matt Cain was a high schooler when the Giants plucked him out of Tennessee, but Shotgun is an old soul. This is a good character team as much as a team of good characters. And despite his mild-mannered Clark-Kent-ian demeanor, Buster Posey fits right in.

Of all the wonderful moments from Buster's first (almost) full season in the Show, I can actually point to one that stands out to me more than all the others. On October 3rd, in Game 162, Buster stepped to the plate in the 8th with the Giants up 2-0 on the Padres and the N.L. West title hanging in the balance. He took an 0-1 mistake from Luke Gregerson and planted it into the first row of the left field bleachers... As he rounded first, Buster pumped his fist in the air, then brought it down tentatively, as if he were embarrassed by this display of emotion... It's that passion, mixed with humility and an unteachable opposite-field approach, that tells me this guy will never have a "down" year. He's gonna be real good for a real long time, and for the next five to six years at least, he'll be making the Giants real good, too.