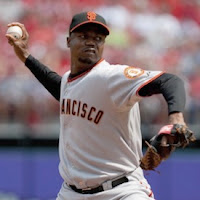 I sing the song of Guillermo Mota, who came out of the bullpen night after night throwing gas and throwing it right down the pipe. If ever a pitcher's style has screamed, "Here it is! Hit it!" it's his. He's a former member of that club from Los Angeles, but we won't hold that against him. Still, there's a moment of trepidation that strikes me every time he enters a game. But I think that has more to do with the fact that I don't know if he's about to blow a lead or strike out the side on nine pitches.

Plotting Guillermo Mota's 2010 on a line graph would produce a shape reminiscent of the expansion of the human population over the past 500 years. He was practically perfect in April, showed some chinks in May, started to bleed in June, limped through July, and was absolutely throttled in August. It got so bad at one point that they put him on the D.L. just to create roster space — and because he was a little banged up. (I'm a sensitive man.) When he came back in late September, it was all hands on deck, and Guillermo stepped up for the Orange and Black. He didn't give up an earnie over his final seven outings, including two in the World Series.

In a lot of ways, he's making a career out of one phenomenal season in 2003, when he was practically untouchable. But there's a great deal to be said for a reliever who comes in throwing strikes.