Countdown to Scottsdale #6: Travis Ishikawa, 1B 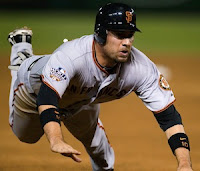 I sing the song of Travis Ishikawa, who's tried his very best to crack the everyday lineup at first base, but whose very best has never been quite good enough. To me, "Hapa" is that quintessential Quadruple-A talent, the kind the Giants have specialized in producing over the past 20-odd years of building teams around Barry Bonds (and recently around a top-flight pitching staff): not quite ready for prime time, but too talented to send back down to Fresno. When you watch him take BP, you wonder when he's going to have a breakout 30-homer year, then you watch him in game situations and stop wondering. Despite his failings in the batter's box, he's always been stout with a glove, and he's never lacked for passion, though at times his passion for Jesus seems to outweigh his passion for baseball.

Fans will recall the occasional postgame interview in which young Travis thanked the Good Lord for helping that ball he hit in the seventh inning carry over the wall. Now, I have no beef with Jesus, but my problems with organized religion stem from the notion that Jesus or Allah or Buddha help us to accomplish great things in our everyday lives. We hear athletes say this shit all the time: "First and foremost, I just want to thank God for giving me the strength to win this game." I've never heard something so patently ridiculous. The truth is: WE are in charge. We make our own decisions. We are responsible for our own accomplishments. When you hit a home run or score a touchdown or redirect a corner into the back of the old onion bag — that's YOU doing it. YOU worked hard your whole life to put yourself in position to make that play at that moment in that game.

So, Travis et al., please take ownership, have a little pride, be a little cocky. It's okay. This is professional sports. The fans will forgive you. And when it comes down to it, ego makes you a better player. Waiting for Jesus to make you great is like waiting for Godot: He ain't coming, so you best get on with it.

Travis entered 2010 well aware that he would be filling a niche role. With Aubrey Huff on board to man first base, Hapa's options were pretty much limited to pinch hitting and late-inning defensive upgrades. And to his credit, he embraced these options like a true professional. He never complained, never waffled, never tanked a play. He was an invaluable member of this squad, as evidenced by his position in this countdown — which is determined by games played. When Aubrey Huff did a stint in left field in July, Travis had a chance to pick up a few starts, and he excelled, hitting nearly .300 for the month. When it came time to set the postseason roster, Travis was on the bubble, but his spot was never really in doubt. He even got to start at first base in a World Series game.

Perhaps that will end up being the high point of Hapa's career — or maybe just his career with the Giants. But even if it does, he'll always be able to show off his ring and tell you how Jesus helped him win a championship.