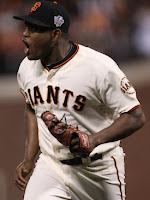 I sing the song of Santiago Casilla, who took a day or two off all of our lives every time he came into a game, but managed to put up a line that would make any papa proud and earned his ring with a fine October. There are probably a lot of us who only remember the bad moments. The bases-clearing triple that blew a 2-run July lead in Arizona... The Casey Blake homer at Chavez Ravine in the midst if a seven-game late-June swoon, when the wheels were falling off the Giants bandwagon... But the numbers don't lie: 55.1 IP, 56 K, 1.95 ERA, .119 WHIP, .208 BAA. And on the regular season's final homestand, he threw 5.1 innings of shutout ball, including one and two thirds in Game 162.

His 7-2 record belies his vulture nature, and it does speak to a little luck. But over the course of the year, he made very few messes and cleaned up even more. As a fan, you have to love his fire. As a human being, you also like to breathe comfortably. I wish the guy would just get on with it and throw the heat right over the plate instead of nibbling himself to death, but I sincerely don't think he knows where the ball is going from pitch to pitch. Regardless, in the final analysis, he's pretty fun to watch.