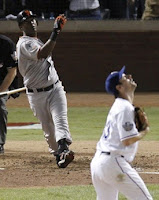 I sing the song of Édgar Rentería, who hit the single most memorable home run in San Francisco Giants history — yeah, I said it — and decided a million bucks wasn't enough of a reward. I was prepared to laud the talents of Mr. Rentería, to speak of his career consistency and professional approach, to comment on his impressive postseason résumé, to lionize his 2010 World Series performance as one of a kind. But he's only one man, and nobody was bigger than this team, even Édgar Rentería. And as clearly as I will recall his exploits for the Orange and Black until my dying day, I can't discount the manner in which he left the club, especially because it is fresher in the mind.

Brian Sabean brought Rentería to San Francisco in 2009 to fill the void left by Omar Vizquel, who filled the void left by Rich Aurilia, who filled the void left by Royce Clayton, who filled the void left by Jose Uribe. The intervening years brought all manner of character actors to the Giants' shortstop position. But these were the household names. These were the heroes. I'd be surprised to learn that any of you thought of Édgar as a hero prior to the Fall Classic. He was overpaid, but that wasn't his fault. He spent more time on the disabled list than off, which was partly his fault. And he never seemed to regain the form he once had in the field or with the bat, which was entirely his fault — his and Father Time's. But that doesn't mean he lacked for moments of brilliance. In fact, prior to 11/1/10, Edgar was responsible for three of the most exhilarating home runs of the past two seasons:
And it doesn't mean fans should blame him for his ridiculous contract. Besides, there ain't one among us who'd turn away that kind of cheese. But it's understandable to hate on the way he brushed aside the Giants' more-than-respectful offer to close out his career with the defending World Series Champions. And the fact that the Reds were dumb enough to best their offer only proves the power of the brain trust in Cincinnati. It also serves as just another stark reminder of the realities of the game.

As some of you might've seen on every MLB highlight reel since the turn of the millennium, Édgar Renteria won the 1997 World Series for the upstart Florida Marlins with an RBI single. This was a couple weeks after the Fish dispatched the N.L West Champion Giants in a three-up, three-down NLDS. (Remember Brian Johnson?) 13 years later, a few more of you probably saw him win the 2010 World Series for the Giants with a three-run home run off Cliff Lee in Game 5. Life's very cyclical, and you never seem to get pristine examples of it like you do in baseball. I suppose it has something to do with the nature of the game. After all, what is it but running in circles? But sometimes, the cycles take a long time coming 'round.