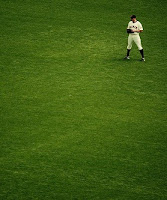 I sing the song of Nate Schierholtz, Bay Area native, lifelong Giants fan, victim of premature balding, and one of the finest defensive right fielders to ever work the grass at McCovey Cove. If he could only prove that he can hit a lick, he might actually make a name for himself in this league. Nate lost the starting RF job to John Bowker before the team broke camp in Scottsdale, and he never stayed on the horse long enough to win it back, even after Bowker proved he was miscast as an everyday solution. He had a good run from mid-April to mid-May, including a 5-for-5 performance in the infamous "Jayson Werth Bloop Double" game and a 3-for-3 night in South Florida, complete with one of his three dingers on the year. But Nate truly excelled as a pinch hitter, hitting a cool .310 with a .911 OPS and six walks in 35 PAs, compared to .232/.640 in 217 PAs as a right fielder. These numbers — and his lefty bat — likely triggered his inclusion on the postseason roster. He didn't see a lot of playing time, but he got a start in the World Series, and he got a ring. So, not too shabby.

I can't help but rep for the local boys, the hometown heroes, the Kevin Frandsens who fulfill their childhood dreams of playing for the Orange and Black — with varying degrees of success. As such, I was an early fan of Nate Schierholtz. I remember watching "Nasty Nate" take BP at AT&T back in 2007. He was raking balls up Triples Alley, slamming them off the brick archways under the arcade (message!), going the opposite way, even plunking a few into the drink. In short, he was spraying the field. I turned to the friend I was with and said, "That kid's gonna be something." I didn't say what, when, or for whom, so I'm holding out hope that my projection — while it's far from PECOTA-worthy — will one day come to fruition. Until then, I'm just happy he got to be a part of the torture in 2010.

(Trivia answer: San Ramon Valley High — If you got it right, you win my undying love and respect. It's all I have to give.)
Posted by Butch Husky at 4:20 PM