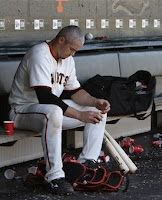 I sing the song of Eli Whiteside, the toughest backup backstop in baseball. I was at Safeco Field for Eli's Gigantes debut in May of 2009. I remember it well because it was the morning after Juan U-RIBE's huuuuuge bases-clearing double that pretty much turned the entire season around. I took the trip with the girl I was seeing at the time. Ostensibly, we were in Seattle to visit some buddies of hers from the old home place. But you can't fault a fan for being a little distracted when his ballclub's in town. She didn't quite understand why I was so ecstatic over Uribe's big hit or why I was so giddy to catch the first game of this new catcher with the unnaturally white hair, but she played along admirably. Eli rolled his first hit as a Giant through the 5-6 hole to get the boys on the board and came up late with a chance to tie the game, but it was not meant to be for the Orange and Black on that particular Sunday.

Little did I realize at the time that was Eli's first MLB appearance since 2005. Little did any of us know the impact he would have on the next two years of Giants baseball. You'll recall the night that Eli became Jonathan Sanchez's personal catcher. It was the same night Dirty held the Padres without a hit at AT&T Park. Yes, that's right: The lone Giants no-hitter in the past 35 years was caught by none other than Eli Whiteside. He should thank his lucky stars from here to eternity that Bengie Molina's wife went into labor that night. After that, Eli had his spot in the catching rotation — and his place in Giants lore — secured. And as Big Money began to slowly deteriorate, the simple country boy from Mississippi became more and more of a fixture on this team.

Then came Gerald "Buster" Posey. And the rest, as they say, is history. Eli did his best to get some playing time after Bengie was traded away to the Rangers and Gerald became the everyday backstop. He even fought his way into a few games during the dog days to give a breather to the future Rookie of the Year. But by the end of September, Young Goodman Whiteside was pretty much an afterthought. He can always brag to $126M man Barry Zito that he made the postseason roster, but he didn't make it into a single game. Regardless, he was there to share in the champagne shower when it was all said and done, and he deserved every moment.