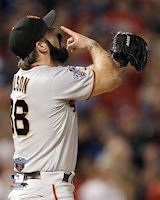 I sing the song of Brian Wilson, a true character of the modern game and one of the most dominant closers in recent memory. He's been an enigma since he first arrived in the Show, from his thunderous '06 debut to his forgettable '07 spring to his triumphant '08 return. By the time he's done, he could be regarded as the franchise's finest ninth inning specialist. He took a gargantuan leap into Giants lore in 2010 by delivering the final outs of Game 162, the NLDS, the NLCS, and the World Series — almost all of them on strikeouts. There won't be a montage of Giants highlights from now until the end of time that does not include his two-armed gesture of reverence and victory. For that reason alone, it's obvious why this man has become the second face of the franchise alongside Big Time Timmy Jim. In fact, judging by the response from 43,000 strong at this year's FanFest, B-Weezy's surpassed everybody's favorite stoner as the No. 1 Fan Favorite Giant — with a bullet.

He's not perfect, but no closer ever is. There are nights when it seems as though he's deliberately nibbling around the strike zone to set up a bases-loaded, no-out situation which he then proceeds to escape with a strikeout and a double play grounder. But there are just as many days when he blows through the side on nine pitches, and the other eight guys in orange and black may as well have left their gloves in the dugout. From September to November of 2010, it seemed like every appearance went like that for Wilson. He carried the bullpen through the season's final weeks and was out-of-control good in the postseason, saving seven of his team's 11 victories without allowing a run and striking out 16 in 11.2 innings. His only blemish was the Alex Gonzalez double that tied Game 2 of the LDS against the Braves. But that mess was created by Sergio Romo.

From the time he took over the full-time closer role to begin the 2008 season, Wilson has consistently improved, and at the ripe age of 27, he's peaking as he enters the prime of his career. The 24th-round draft pick out of LSU who fought his way back from Tommy John surgery in his first professional season has bettered his numbers in every significant statistical category over the past three seasons. Of course, I'm ignoring what might be considered the "true test" of a closer's metal: saves and blown saves. But like wins and losses, sometimes these aren't within a closer's control. Often, they're more of a byproduct of timing than anything else. In 2010, Wilson had impeccably good timing. His 48 saves tied the franchise record set by "Shooter" Rod Beck. And in a display of the class that tends to get overlooked in analysis of his eccentricities, he said he was proud and humbled to share the record with a Giants legend.

There have been any number of commentaries on Weezy as a pop culture phenomenon, written by bloggers and scribes more eloquent and witty than I. If you have no idea what I'm talking about, do a Google search for "Brian Wilson, machine" or "Brian Wilson, beard" or — most enlightening — "Brian Wilson, sea captain". He's the guy who coined the phrases "Too Much Awesome" (in reference to his epic orange Nike cleats), "Nailed It" (in reference to the World Series championship), and "Delicious" (in reference to just about everything). When he returned to Twitter after a nearly two-year hiatus, he amassed 20,000 followers within 12 hours. His tweets receive a level of attention normally reserved for the likes of Barack Obama and Lady Gaga.

Asked his thoughts as he stood on the mound in Arlington with one strike to Nelson Cruz standing between the Giants and their first World Series title in 56 years, here's what Brian Wilson said:

"I was thinking, 'San Francisco deserves this,' My final pitch is for all the legends of the game in San Francisco. I just smiled, threw the pitch, knew what was going to happen, and then I had a bunch of guys aiming for me."

Thanks, Weezy
Posted by Butch Husky at 10:30 AM