Down on the Farm: "Baby" Giants Report 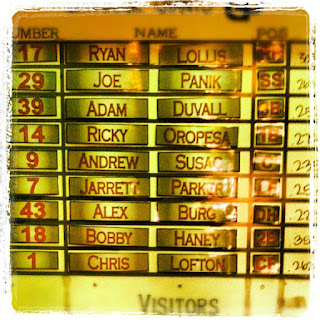 Went down the street to watch the San José Giants last night. I had no idea it was a fireworks night, or I probably would've waited for another day. When I go to a game alone, I prefer a sparse crowd. Makes me feel like less of a loser baseball geek. Hard to think a fish can disappear easier in a smaller pond, but that's how it feels.

Anyway, of course, it's packed with families, and with families comes kids, and with kids comes the church-like stand-up-sit-down routine every ten seconds because somebody's little brat can't sit still for five freaking minutes – as if it's a chore to watch the bloody game.

I'm the kinda guy with tree stumps for legs, so I have to sit on the aisle to be able to stretch out. In a sparse crowd, this is no big deal. But on a fireworks night at Muni, it's f***ing torture. It becomes even more tortuous when the usually solid Jack Snodgrass gives up six runs over the first three innings...

Read more »
Posted by Butch Husky at 8:18 PM No comments:

What's the matter with Tim-my? 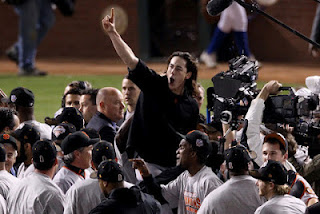 First off, he's not a bum, and it disgusts me a little to see him being treated as such on he blogs and the Twitters and the interwebs. Everyody needs to chill the mess out for a second and remember all the memories this kid has brought us in his relatively short time in the Orange and Black...

Okay, now that we've paid reverence to the past, what about the present?

On paper, and in life, it's pretty much a mixed bag. Throw out the wildly inconsistent innings in which he's been lit up like the White House Christmas Tree, and his numbers look halfway decent. Throw out the W/L record, and his K/9 is still above average. The walks are troublesome, but like the runs, they're mostly coming in bunches – after all, walks and runs go together like Dylan Hernandez and In-N-Out. (Rimshot!)

It's not like we haven't seen this movie before. Remember this guy? How many times did we curse his name for throwing four perfect innings with seven strikeouts wrapped around one inning when he melted down and gave up the farm? All the talent in the world and probably the best pure stuff on an All-Star staff, but ne'er the personality to harness it.

Seems like los Gigantes are burdened with a number of anxiety-ridden players. Not surprising. Baseball can be an anxiety-inducing sport. Most of the action comes during times of inaction, when the mind and the heart are sent racing with all the possibilities of what could result from the next pitch, the next swing, the next short hop...

But compared to other clubs, the Giants seem to have a higher percentage of dudes with very little barrier between the deep recesses of their subconscious and their waking mind. I'm not gonna name names, but if you follow this team, you know exactly who I'm talking about. Maybe that's fitting for a squad from psychedelic San Francisco. But it doesn't help when your goal is winning championships.

And that's exactly what Timmy's done his whole career, in the professional and amateur ranks...
All of this despite coaches, scouts, and other baseball know-it-alls attempting to convince the rest of us that he never had a shot at greatness because he was just too small. This kid's been confounding expectations every step of the way, and I get the distinct impression he loves doing it.

A lot has been made of Chris Lincecum's remarks to USA Today accusing the media of bashing Tim and his legacy. In my humble opinion, dad needs to shut his trap. The beat writers have a job to do, but it's not disrespecting anyone to point out the fact that his kid has a 6-plus ERA and the team is 2-12 in his starts.

I paid more attention to Tim's comments in the same article about lacking confidence in his stuff and putting the weight of the world on his shoulders.

I've never gone through anything like this in my life. I've set the bar high for myself, and I know I'm not coming through. I've been wearing these (expletive) losses hard. Real hard. This game is my passion, and this is killing me. I know I'm going to come out of this eventually. I just wish I knew when.

That's a pretty heady quote to read from the alleged ace of your team's starting staff. But let's focus for a second on one line from the quote: "I've set the bar high for myself." If you want to know what I think is buggin' Timmy (and doesn't everybody?), that's the kernel of truth upon which I'll hang my hat.

Think of a kid who loves video games. Plays 'em so much, he gets bored testing his mettle against better and better computer opponents at higher and higher difficulty levels, until one day, he's got nothing left to prove to himself, and he chucks the game in a pile with his other conquests.

That's how I look at Timmy right now. Throughout his career, playing baseball has been like a video game, and he's been dominating at each and every level. He had a slight hiccup in August 2010, when his thumb slipped off the controller thanks to some leftover potato chip grease. But he picked himself off the mat and beasted for another calendar year.

Then, sometime late last season, he realized that he's already beaten all the levels of this game. He's got nothing left to prove. The only challenge left is the next start. The next inning. The next batter. The next pitch. And every now and then, it doesn't seem like enough of a challenge.

There's a consistent buzz on Twitter about the drop in velocity from his halcyon days of humping 96-97 in the 8th inning. But he's not getting any younger, and this happens to every pitcher. Like Bengie says, the dude's still got the stuff – hence the 1+ K/9 average – he just needs to learn how to pitch again. But to do that, he's got to have the desire.

So if Ryan Vogelsong said anything to Timmy in the dugout after his near-disaster first inning against the A's on Friday night, I'm guessing it went something like this:

Dude, you know what I've gone through in my career, and I wouldn't give it up for anything, because the challenge and the heartache and the pain has made me stronger as a player – and a man. But I might be tempted to give all that up if I could switch places with you for one night and know what it's like to be the most feared son of a bitch in the baseball universe.

This was Vogelsong following a loss to Jered Weaver and the Angels last Wednesday:

For me to get people to start to believe that I’m for real, I’ve got to beat the Kershaws, the Weavers. I wasn’t able to do that tonight and that’s disappointing. I still feel I’ve got something to prove every time I step on the field. For people to stop thinking last year was a fluke... those are the games I’ve got to win.

Want to guess how many runs the Giants' offense posted for Ryan that night? I'll give you a second to think about it... If you answered, "Zero, zip, none," you're the winner of a set of steak knives.

This is why we call the man Vogelstrong. He has the attitude you want to see out of your entire pitching staff: "So what if we got shutout? I should've won that game." That's not to mention that he'd already beaten Kershaw once this season – and just did so again.

I don't know what the future portends for this wandering soul, but man oh man if he isn't leaving us a pair of the most gritty and triumphant seasons we've ever seen as a memory to impart to our grandkids...