Who is Butch Husky? 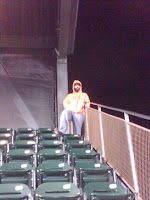 Butch Husky is an enigma. He is a phantom. A mirage. A figment of my overzealous imagination. So, who am I?

First and foremost, I'm a San Francisco Giants fan. But far from making this blog a homer paradise, I feel like my fanaticism gives me the clarity and depth to explore my team in the most objective manner, with an eye for the fan experience and a nose for bullshit. There are a lot of these spots out there where guys and gals like me opine about the game and attempt to wax poetic, but I like to think what sets this tiny corner of the Interwebs apart is my ability to cut through the hyperbole and speak the truth.

I'm at least a third-generation Giants fan. My grandfather pulled for the New York Giants in the first half of the 20th Century, and when he moved West to the Golden State, the team followed — albeit a decade or two later. He and my father were there for the first Major League game at Seals Stadium in 1958. They were there for the first game at Candlestick in 1960. When I was 9 years old, my grandmother pulled me out of school to go to Game 4 of the '87 NLCS, two months after my grandfather had succumbed to cancer. In 2002, I wept harder than any man should ever weep, and the pain ran 48 years deep.

Prior to last season, for the very first time, I became a Giants season ticket holder. A friend's grandmother passed away, leaving behind the seats in which we'd seen all manner of insanity since the opening of Pacific Bell er SBC er AT&T Park. The choice was simple: let the seats go or bite the bullet? Weighing my salary against my rent against my desire to enjoy my life, I bit the bullet. That my team should reward me with the miracle that was 2010 is the finest example of the old axiom: Good things come to those who wait.

My feed is not limited to the Giants, nor solely to baseball. You'll find blurbs on basketball, feelings on football (the real football), points on politics (the progressive variety), takes on the Trojans (the 'SC variety), and even commentary on curling. In short, this is a sports blog, but nothing is off limits, especially if I've got a bug up my ass.

I hope you enjoy your stay.