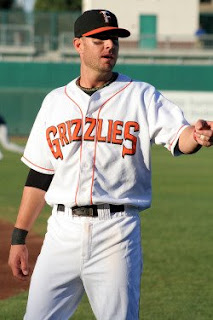 As a vociferous Giants fan and a graduate of Bellarmine College Prep, it’s been difficult for me to deal with the seemingly endless vacillation of Kevin Frandsen’s career with the Orange and Black.

The 12th-round pick who received only one college scholarship offer — and proceeded to break batting records at San Jose State — has fought tooth and nail to carve out a place in this organization, but as beloved as he is by fans and coaches alike, no matter how much talent he displays at each and every level, a consistent spot on the 25-man roster has been near-impossible to come by.

This all could have ended last year had Franny’s Achilles tendon not snapped like a twig during Spring Training. He had a lock on the second base gig thanks to a .295 average over the final two months of 2007, spent almost exclusively in the starting nine thanks to Ray Durham’s gimpy knees. (Frandsen hit .370/.427/.479 in 73 September ABs.)

One freak injury and a lost season later, and the world’s biggest Giants fan finds himself the odd man out, most recently demoted in favor of Fresno Flavor of the Month, Matt Downs. The former Spartan’s been up and down three times this year alone, wearing a groove in the asphalt on Pacheco Pass. He was recalled for three days in June to replace Travis Ishikawa while the first baseman was on the bereavement list.

There are many excuses with how Frandsen is handled, so much so that’s it’s clear the team understands the level of interest from South Bay fans who want to see their hometown boy make good. The most common excuse goes something like, “He’s just not getting enough at-bats at this level, so he’d be better served starting every day in Triple-A.”

This, of course, leads one to ask the question: Why isn’t Frandsen getting a serious look at the major league level?

Well, the most obvious answer would be his lack of production at the plate in a big league uniform this season. In 16 games, he’s had 39 ABs and collected five hits for a robust .128 average. Looking only at those numbers would have you believe Johnny LeMaster would make a better second bagger for the 2009 Giants. But when you’re picking up starts to spell your teammates or coming in as a pinch hitter after cooling on the bench for eight innings, you can’t say you’re getting quality time to shine.

And it’s not like the kid has anything left to learn with the Grizzlies. Check out his line in 65 games at Triple-A this season:

With Manny Burriss on the DL to close out the season, Matt Downs looking like a flash in the pan, and Juan Uribe one poor week away from becoming a pumpkin, there is no reason Kevin Frandsen should not be getting a serious look at second base for this team. He’s hit the ball hard all year, really picked up his glove game — even at short, where he struggled in the shadow of Omar Vizquel — and played with the kind of passion you rarely see once a guy straps it on in the Show. 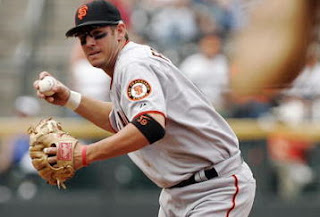 Of course, all of this mess could’ve been moot had Brian Sabean not gone out and paid what now appears to be far too much to acquire Edgar Renteria’s veteran presence for the shortstop position. I dare anyone to prove to me that a Burriss-Frandsen double play combo wouldn’t have worked out just as well for the Giants as Renteria-Uribe (and I say that as Edgar’s fantasy owner and Uribe’s biggest fan for the Turning Point moment in Seattle).

In my mind, any success this year is icing on the cake of player development. That this team is in contention a year or two early only speaks to the talent we’re already seeing from the under-30 set. You don’t have to look much farther than Molina’s poor performance since April and the inconsistency of “gamers” like Rowand, Winn, and Renteria to know who’s been carrying this team on their unlikely run toward a pennant.

If this year is s’posed to be about a youth movement, then let’s have a youth movement. If the Giants get to October baseball, they’ll have as good a shot as anybody, no matter who’s playing up the middle.