The Long and Winding Road

Somebody finally got a hit off Jonathan Sanchez, and boy what a hit. But apart from GA’s bomb and a two-run shot from Chipper, Sanchy was pretty clean. A surprise removal in a 3-3 tie after making only 86 pitches in six innings precipitated the first, honest-to-god, absolute and complete bullpen meltdown of the season.

Not the best start to a four-game marathon in Hot-lanta, but the offense managed to plate a few for the second straight day, and most importantly, Sanchez seems to be finding a groove for the first time in his career as a starter. I’ve got a feeling his name is coming off the trade boards as I write these words. Of course, that has more to do with the condition of Randy Johnson’s rotator cuff than his performance on the mound, but at least he hasn’t looked like a stop-gap recently.

Sergio Romo gave up four runs without recording an out and saw his ERA jump over two and a half runs to 6.59.

Looks like the honeymoon’s over for the perpetually frightened-looking Ryan "The Big" Sadowski. As eager as I am for everybody to get their chance to shine — just like in tee ball — I wasn’t all that hot on the kid before today, and I soured even more around the time he gave up back-to-back crooked numbers. 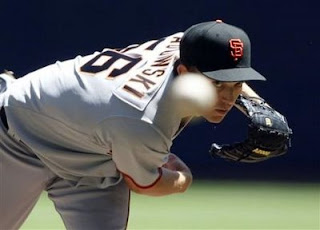 I know all the arguments in favor of a much bally-hooed “trade for a bat,” but there is no reasonable way to contend that one bat would prevent losses of 11-3 or 8-1. You know what could prevent them? Pitching we were seeing just before the break. Baby, baby, where did our staff go?

The Giants have climbed above .500 largely because their bullpen has been just as effective as the rotation. But all it takes to upset that favorable balance and overwork the relievers is a few more abbreviated performances such as Sadowski's within a short span.

I’m beginning to think the whole All-Star break thing is a really bad idea. Maybe next year, we can just play through. You know, like in golf.

“I can do nothing to help the team." - Edgar Réntería, to which I would add: “No shit, Sherlock.” 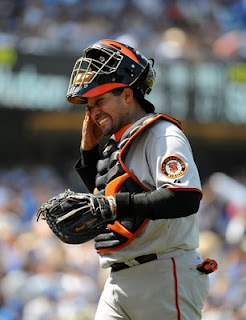 Not much to say when Lincecum gets out-pitched except: Damn. I will say that this offense is starting to look pretty pathetic, but at the lowest point of the season in mid-May, they weren’t scraping across runs in the late innings. They were just giving up.

I’ll take a team “trying to do too much” over one that rolls over and dies. You can see it in the eyes of everyone in that dugout. They’re searching for the spark they lost over the break (or somewhere in the middle innings of that afterthought of a loss to the Padres that closed out the first half).

Fear not, reactionary Fringe-dwellers! The worm still has time to turn again, but we may have to give up on last week’s pipe dream of an NL West championship. From here on in, it’s Wild Card or bust!

"We're not playing with the same intensity." - Bengie Molina

There may be no such thing as a “must win” game in July, but this has to be as close as it gets. The chartered flight to Denver would’ve been rather quiet coming off a four-game sweep with only one win in seven games. Not that two outta seven sounds much better, but the dynamics of a baseball season can change from day to day. When you’re about to enter the house of the team that just passed you in the Wild Card race, you need all the swagger you can get.

The need to pull one out of their ass became even more pronounced after Barry Zito completed the seventh inning, snapping a thread of Jekyll and Hyde performances going back to mid-June. He’s now the proud papa of two quality starts in a row. All for only $5K a pitch. 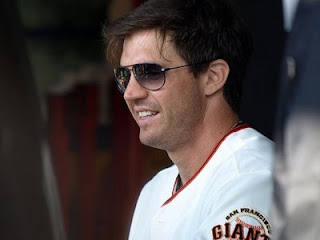 As previously reported, the Z-Man gets the lowest run support in the league, and that’s really the only reason to feel sorry for him. In his last start, the Giants offense plated none runs. They only managed a run before he left the game today. A four-run outburst of seeing-eye groundballs and generous errors saved him from another workout and handed him his sixth victory. He didn’t win his sixth last year until August.

While I’ll be the first to defend my fellow Trojan, and he’s shown some real progress this year, especially in April/May, they call these the “Dog Days” for a reason. Looking back at his career arc, Zito’s numbers are appreciably better in the second half — ERA about three-quarters of a run lower, reduced WHIP, and BAA drop of .27 — but his problem has always been consistency. It makes you wonder what he was smoking in 2002.

Whatever it was, I want some of that shit.

"You know, you get your dauber down and when you're not hitting, you look flat as a team. To get a win does a lot for the morale of this club.” - Bruce Bochy

We'll have a much better idea of where this team's "dauber" is at after three games at Coors...

P.S. I know many of you are anxious to hear my take on K-Fran's most recent demotion to Purgatory, er, Fresno. Look for a special edition of Franny Watch, coming soon to a Blogspot near you.
Posted by Butch Husky at 12:00 PM