Did you know there are three Major League stadiums named after beer companies? 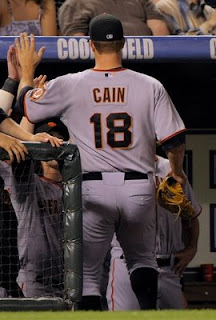 If karma does indeed surround us like a warm blanket, there is no greater evidence than the career arc of Main Cain. Should he sustain his level of play, should the defense continue to play Gold Glove defense at all positions behind him, should the Giants capture national attention and reach the playoffs, this team might be fielding another Cy Young triumvirate in the 2010 rotation... without Randy Johnson.

There, I said it. Remember: Jinxes are bullshit. Players make plays. Or they don’t. It’s as simple as that.

The good vibes from Thursday’s afternoon affair in Hot-lanta carried over here as the offense awoke for just long enough to do critical damage, and Matty laid down the law over seven nearly-spotless innings. But the real hero of the game didn’t do it (all) with his bat...

The Kung Fu Panda made a pair of unbelievable backhand plays down the line to rob speed demon Dexter Fowler. If you want an idea of how athletic a rolly-polly of a human being can be, have a look at this and also this.

"That's a pretty good feeling. Obviously, they're rooting against us, but it was fun to have that kind of excitement in the stadium. You make it work for you." - Matt Cain

Jonathan Sánchez has definitely learned a lot about himself since being demoted to the bullpen and rising like a phoenix to throw the first no-no for Los Gigantes in 33 long years. But he still hasn’t learned how to control his temper. Yes, Johnny, the rain came at just the right time to screw with your mojo. But the rain didn’t put two guys on base or groove one to Tulowitski. You did. And you can’t decide when it’s too wet to pitch. You’re on the umpires’ time, and they said play ball.

The Giants offense couldn’t even manage to make it interesting after that. Sánchez nearly took himself out of the game with a temper tantrum in the fourth and eventually went to the showers after surrendering a two-spot in the sixth. The bullpen had a decent showing... provided you discount a wasted outing from Merkin Valdez, who gave up three runs on four hits and a walk while navigating the eighth.

I gotta say, that dinger really lit up the Rockies dugout. The Giants staff had moseyed into town and promptly shut down the league’s second-most-potent offense. The home side had been perched on the doorstep but couldn’t seem to get home. Well, that all changed after Tulo returned to the first-base dugout. The fire was relit, and it carried his team to victory.

"I gave up two hits in the first five innings and there were three runs. I was like, 'How that happened?' Just one pitch, it went out of the park and you know the score." - Jonathan Sánchez 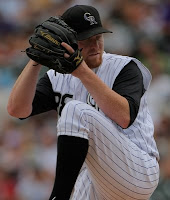 Call me on it if I’m full of shit, but the Giants never perform well against sinkerballers. Brandon Webb and Derek Lowe always spring to mind as card-carrying members of this band of tricksters who’ve played their pranks on all-too-gullable Giants squads over the years. Add Aaron Cook to the rolls.

The simple truth is that eager bats mixed with sinking pitches lead to ground balls, lots of them, sixteen of them for outs in this game alone, including a poorly-timed double-play ball from Edgar Renteria. To be fair, Edgar drove in one Giants run and set up the other one, but it’s always the failures that we remember. Such is baseball. Such is life.

Right now, this offense couldn’t hit a beach ball, and there’s only so much a pitching staff can do. I’m not abandoning my position that this team can win as constituted, but you’re going to hear a lot of whispers around the Cove when the team returns this week. As pointed out by Baggarly, trade topic Freddy Sanchez will be at AT&T with the Bucs to start the homestand. 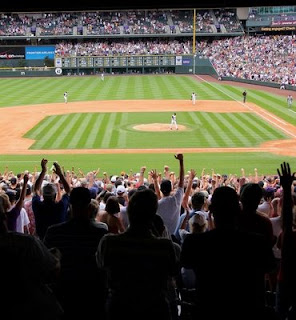 If the Wild Card race comes down to the Giants and Rockies, I think we’re all in for quite a treat. Both teams have obvious strengths and just enough of everything else to make them winning clubs. They both have a lot of youth mixed with just enough veteran leadership. Neither team was predicted to do much of anything. And both of their parks have been filled of late with loyal fans hungry for the postseason.

The folks at Coors Field are rising to their feet with two strikes and two outs. And I’m pretty sure I heard some die hard fans of the Gothams chanting “Lets go Giants” in the later innings — along with at least one rendition of “U-RIBE!” It’s plain to see the faithful on both sides understand the significance of these games. There was a playoff atmosphere enveloping that park all weekend, and it came through even on television.

I hope we all find that passion within ourselves and welcome our team home with relentless support.
Posted by Butch Husky at 12:00 PM