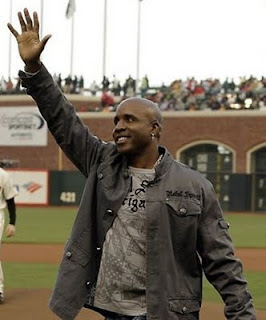 The boys just took the field. There was a short but sweet ceremony to honor Giants majority share holder Sue Burns before the game. Tasteful, with the whole team on the field. A full youth orchestra played the national anthem. Did I mention the former Giant who made an appearance to catch the ceremonial first pitch?

Check out Curtis Pashelka's pregame notes filling in for Baggs.

Lincecum strikes out two in dominating fashion but needs help from new callup Velez on a diving catch to end the inning. Noah tells me I should mention the thong the girl in the next row is wearing. It is, indeed, pretty hot.

I can't express in words how sweet it looks to track a Panda drive from the Club Level. Very nice. We upgraded on the way in by trading four at the back in 104 for a pair in 208. We've got a straight-ahead view up the first-to-second base line. Funny how I've never been scammed by scalpers, yet everyone else seems to think it's common practice.

There goes the no hitter.

I've got some kids behind me doing play-by-play that's good enough for radio in most major baseball markets I've vistited, Particularly San Diego.

Major props to Andres Torres for bailing out Timmy, who didn't do badly at the plate with the bases juiced and nobody out — though he did just enough to hit into a runless double play. Either way, I'm not gonna complain about the results.

A freaky play just added another run. Looks like a short liner kicked off Jones in right center and was caught barehanded by a diving Delwyn Young... and they called it a hit. Winn thrown out in the confusion, but I'll take it. You'll probably see that on SportsCenter. 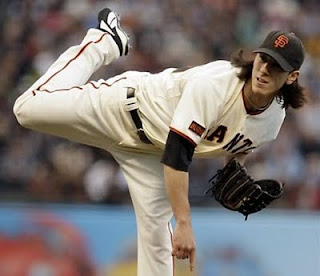 Baggarly just jumped on to his blog in relief of his reliever, Curtis, to tell us that Brian Sabean just wheeled a deal and may not be done...

Meanwhile, Lincecum is dealing as well, and the Peanut gallery behind me couldn't be giddier. Strikeout, throw-out double play. Was he out? Sorry. My MLBTV.com free trial expired last week.

Sure enough, I start talking about the game, and Timmy goes out and throws up an inning like that. Noah quips, "He's been hanging out with Zito too much." Let's hope sixth inning implosions aren't contagious.

Meanwhile, Russ and Lon are behind me tearing it up. Second and third, no out... "Lincecum needs a strikeout." 0-2 count... "He should waste one here." Double off the bricks... "Tough bounce, but Randy Winn knows the yard. No problem."

Some might ask, whither do you live blog? I prefer to go down.

I don't know much, but I know that Bonds would've had none chance on that one. I also know that Velez's dive was all style points. Looks like they're letting Timmy hit. Just in case Kruk and Kuip haven't brought it up, the Giants' single game strikeout record is 16, set by Christy Mathewson in October of 1904 and matched — I believe — by Jason Schmidt a few years ago. Research!

Every time I see a baby at the park, all dolled up in Orange and Black, I get a little weepy eyed. But not because it's cute or anything. These are tears of empathy. I know what this kid's gonna go through, and it kills me a little bit. I look into his wide eyes and I see years of frustration, game after game of torment, and eventual resignation to the vagaries of being a Giants fan...

But who wants to hear all that? Panda's up.

Let it be known, Jack Wilson is putting on a clinic at shortstop. The fog rolled in during Panda's last AB, and one of our young neighbors screamed: "The baseball spirits are upon us!" After Pablo beat out an amazing, diving, hurling play by Wilson, Bengie went ahead and grounded into that double play Noah and I called about three innings ago. Eh, he was due.

With the bullpen empty, looks like Timmy's coming out to pitch the ninth. Don't know how wise that is, but if he strikes out the side, he ties a team record. There are times I'd like to be a manager, and this isn't one of them. 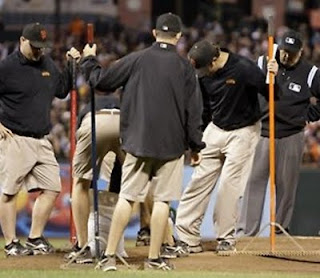 Interesting tactic from Grabow, trying to freeze Lincecum by walking two and bringing out the grounds crew to fix a hole in the mound. Timmy's hole.

Lincecum came out and dug the hole out again. Love this kid. The crowd's on it's feet. Respect.

Gotta run to the car afterwards, so nothing more until after this is over.

Thanks to everyone who paid attention during this little experiment, all three of you. I gotta say the whole live-blogging thing is a bit distracting from the actual event, and one definitely sticks out like a sore thumb with a MacBook in their lap at a ballgame — though maybe not so much on the Club Level. But they offer the free WiFi, and we lap it up as happy 21st Century consumers.

Big win for the team, especially on the night they remembered their Team Mom. Huge game for Lincecum — btw, the two runs he gave up were unearned thanks to a Renteria error. Crafty deal from Sabes to hold onto prized talent and still grab a healthy corner infield bat. What this means for Ishi is anyone's guess. Probably a glorified pinch hitting role. Time to finally drop him from the ol' fantasy team...

In case you were wondering, the "Home Run King" stayed until the final out.
Posted by Butch Husky at 7:16 PM