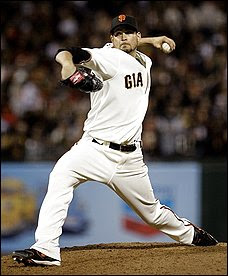 There's going to be an awful lot written about Jonathan Sánchez no-hitting the Padres Friday night at the Cove, and I don't want to repeat any of what's already been said. This opening salvo of Under the Bleachers is about a personal moment for me, for my family, and anyone who truly, madly, deeply cares about this team.

Tim Lincecum had thrown a gem the previous evening, Matt Cain was scheduled to go today, and in between was the problem child with confidence and concentration issues, starting only because the Big Unit had just landed himself on the DL by taking what has to be one of the ugliest swings in baseball history. I'm not going to say our chances for a W were slim. After all, we've got the second-best record in the league, and the Padres are, well, the Padres. But the matchup certainly left a lot to be desired. So I declined.

I went to the dinner I'd planned to attend, figuring I'd leave around 8:30 and pick the game up on the radio around the fourth inning. I was one frame off. By the time I returned to my car, I was listening to Sánchez set down the side in the top of the fifth. I remember hearing Kuiper say the Pads had none baserunners through five and thinking, "Well, 'bout time for our head case pitcher to fall apart."

After stopping by work to pick up a forgotten file, I got back in the car in time to hear Panda's monster three-run jack land somewhere in Hayward. If you'll allow me to digress from the no-hitter thread for a moment... After watching a replay later in the evening, I'd have to say that's right up there among the two or three most impressive dingers in the short history of our waterfront ballpark. The other two I'd place alongside it on the mantle? The Big Cat's bomb to the left field promenade above the bleachers in '01 and Bonds' 10th-inning Splash Hit walk-off against Ray King and the Braves in his return to the lineup direct from his father's deathbed in August '03. (The former for sheer audacity, the latter for the pure emotion. Did I mention Bonds hit another extra-inning walk-off in the same series?)

By the time I reached my abode and had the TV tuned to Kruk-n-Kuip-ville, Little Johnny Sánchez was striking out the side in the top of the seventh. The knowledge of Giants fans in the park who cheered the K of Tony Gwynn, Jr., really impressed me and filled me with a sense of pride. All year, I've felt like the faithful have been slowly but surely taking back the ballpark from the wine-and-cheesers more interested in saying they were there for another Bonds milestone than actually pulling for the team. It says a lot about our progress that the majority of the 30K in attendance last night recognized that Gwynn had broken up Timmy's no-no in the very same inning one night before.

My eighth inning was absolute hell as I struggled to resist the temptation to call every Giants fan on my cell's contacts list, but Sánchez looked cool as the other side of the pillow, especially after "El Dictador" U-Ribe! got hit with the wet noodle of bad karma. Most pitchers can't get over moments like that. Hell, we just watched The Great Lincecum practically fall to pieces after Gwynn got his aforementioned hit on Thursday. It only took one pitch to bring Johnny back into the game. He threw one to the backstop, but recovered to retire the next two batters, including former Giants catcher Eliezer Alfonzo, who I thought for sure would break it up for the sake of synchronicity.

After Eliezer swung over the top of another perfect breaking ball, I called three people: my younger brother, my father, and my mother. I didn't have to say a word to my brother. He was a nervous wreck, watching the game with our middle brother and a room full of friends with no concept of baseball or the implications of what was transpiring on the television. Consequently, they couldn't utter a word to each other for fear of having to explain the situation and thus "jinx" it.

Satisfied, I rang my father, who it turns out was in another room of the same house as my brothers surfing the net and chatting on the phone — a.k.a. snurfing. I demanded he turn on the game or go watch it with his sons.

"Why?" he asked, and I almost cursed him out.

"Dad, how many times in this life have I called you and ordered you to turn on a game?"

"Turn on the game. Look at the line score. That's all I'm gonna say." And I hung up.

Mom was the easiest of the bunch. All I had to do was say, "As your son, I'd advise you to pause the movie you're watching and switch over to the Giants game." Her response? "OK. I won't say a word." I love my mom.

Waiting out our rally in the bottom of the ninth was agony. I bit my lip when Sánchez took a huge rip on an 0-1 fastball at the letters. Just our luck that he'd pull an oblique right there. By the time he came out for the ninth, my heart was racing, the crowd was on its feet to stay, and my immediate family was poised in front of three different televisions in three different rooms, watching something a full 3/5ths of them had never seen in their lives.

Again, there is much that could be written about those last three outs, and much of it has already been said. All I remember is kneeling before the television like a penitent man in church. I had to stop pacing, but I couldn't sit down.

When Rowand went into the wall to save it all I pounded the floor with my hands until they stung. 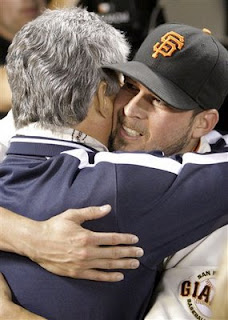 When Cabrera watched that last back-door slider slip through a corner of the strike zone, when Brian Runge rung him up with the gusto of a trained actor who knows he's playing the role of his life, when Sánchez met Whiteside for a hug about 30 feet, 3 inches from home plate, I didn't cry, I didn't pray. I just kept uttering the words: "Unbelievable... Absolutely unbelievable..."

It was as close as I'd been to that level of bliss since Game 5 of the 2002 NLCS. I went so ape shit I missed eight calls and spent the rest of the night on the phone. Then, I woke up this morning and figured it was about time I dust off my fingers and finally put some content up on this here blog thingy. Because there's something happening at 24 Willie Mays Plaza, and if you don't believe I suggest you attend a game sometime soon. (Did I mention Matt Cain is pitching tonight?)

I'm no fairweather fan. I'll tell it like it is, and I'll opine as to why it is. But I pride myself on being honest about my team. In many ways, I think the true fanatics are the only ones who can achieve the level of objectivity we all wish could be found in sports journalism. Reactionary I'm not. Passionate I am.

If you want wall-to-wall doom-and-gloom or non-stop homerism, you're gonna have to go somewhere else.

Such is baseball. Such is life.
Posted by Butch Husky at 4:20 PM