Countdown to Scottsdale #21: John Bowker, OF 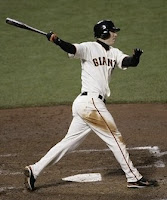 I sing the song of John Bowker, who burned bright but never quite rose above a quadruple-A player for the Orange and Black. After two years on the B-squad, Bowker earned a starting spot in right field to open the 2010 season. But ineffectiveness at the plate (.196 BA in April) eventually saw him gripping more pine than leather.

I was there for his career debut, in April of 2008 against none other than Todd Wellemeyer and the mighty St. Louis Cardinals. Bowker went 2-for-3 with a two-run jack, and Matt Cain gave up two runs over six innings, but the bullpen gave way in the late innings for an 8-7 loss. My buddy had an in with LaRussa, so we had decent seats just inside the visitors dugout, about fifteen rows up. To this day, one of the best spots I've ever had for a game at the Cove. The seat was so good, in fact, I thought John Bowker was for real.

So did a lot of people. When he was traded to the Pirates in exchange for bullpen messiah Javier Lopez, there was trepidation in the ranks of the Lunatic Fringe. Pragmatic fanatic that I am, I chose to look on the bright side: maybe a change of scenery was all John needed to make his mark in this league. You have to find solace in the trail of pawns moved from station to station. In this day and age, loyalty is a fleeting virtue, and fan association is to the jersey, not the player. Regardless, I will still root for John Bowker, and I hope he gets his ring.