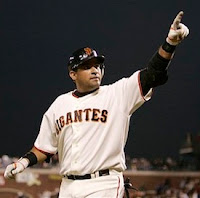 I sing the song of Bengie Molina, who guided his team through the lowest of lows but couldn't stand beside them during the highest of highs. I recall living in Southern California in the wake of the Giants epic World Series fail against Bengie's Angels. The local sports jocks had taken to bashing on Molina for his hefty girth and slow, plodding approach to baserunning. It didn't matter that he was a Gold Glove catcher who could mash. They ripped him for the one thing he honestly couldn't control: he was a big, slow dude. I have to admit, I felt sorry for the guy. He deserved more respect.

Giants fans gave him that respect. He was "Big Money", Bengie "Mo", Mr. Gigante. For three and a half seasons, he solidified what had been the most fluid position at the Cove. Benito gave way to A.J. gave way to Mike Matheny gave way to career-ending injury, all in the course of three years. Something had to be done. This team needed a rock in the tempest. They found it in Bengie Molina. No matter the score, the inning, the team's place in the standings, Big Money was there with the two-out RBI, the perfect strike to nail a runner at second, the tying home run that scraped the backside of the cars in left field. So he couldn't run a damn, but what did it matter? He was the only one on the team who could hit a lick to save his life.

The bitter irony of Molina's tenure with the Giants began the night his wife went into labor and Jonathan Sanchez threw the first Giants no-hitter since 1975. Bengie had gently nurtured the talent in Sanchez, and despite the joy of the occasion, it was a bit sad that Molina couldn't be there to hug his friend on the night of his life. It might've been the night of Bengie's life, too. But he'll never know. By the end of the year, Gerald "Buster" Posey was getting his first cup off coffee in the Show, and the writing was, as they say, on the wall. We all knew it was only a matter of time, Bengie most of all, probably. He said all the right things and did right by Buster in bringing him along with a staff that he'd single-handedly developed (Tim Lincecum, Dirty, and for the most part, Matt Cain had hardly thrown to any other catcher), but you could read the hurt in his eyes and see it in his even slower gait around the base paths. When the time finally came, he took it like a man, even texted Posey to wish him the best. Then he rode off into the sunset to join the eventual American League Champions.

It made perfect sense that the Rangers and Giants would each find their way to a pennant. I'd even go so far as to say the Baseball Gods were having a field day in 2010, for all the cycles that came to fruition, all the pieces that fell into place, and all the pieces that fell by the wayside. Case in point: When my STH partner and I arrived at Section 104 for Game 2 of the Series, we found Bengie Molina's mother, the matriarch of the Molina Catching Clan, posted in one of our seats. She had bad knees — irony of ironies! — and didn't speak a lick of English, but through an impromptu usher-slash-interpreter, she offered to trade one of us her ticket in the Rangers family section below. Obviously, that was not happening, even for such an austere guest. But we let them pull up a sliding chair, and the old gal sat next to me for the whole game. I'm glad I chatted her up before the 8th inning walk-a-thon or she might not have talked to me at all. (I was a little out of it by that point, understandably.) In my best broken Spanish, I told her that we missed Bengie and that he was a good Giant. I told her to tell him that. I wonder if she did.

It was good to hear that Bengie would get a ring and a full World Series share, but it was never really in doubt. After all, he defined the character of this club, and it's that character that will live on in the Orange and Black long after he's gone.