Countdown to Scottsdale #4: Andrés Torres, OF 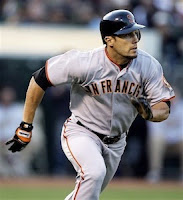 I sing the song of Andrés Torres, who resurrected his career in the orange and black, and left it all on the field — including his appendix — as the Giants made their run to Left Coast immortality. I had a dream last night that the Giants hadn't re-signed the 2010 Willie Mac Award winner, and he'd just inked a two-year deal with the Mets. Needless to say, I had a panic attack and woke in a cold sweat to the comforting reality that Andrés is indeed on contract to play at McCovey Cove this season. Why do I bother to bring this up? I mean, this ain't no place for me to work out my personal affairs...

Well, the thing is, after I woke up and went to sit on the shitter for a minute, I got to wondering: would the same dream about any other player outside of the Golden Children of the starting rotation give me the same amount of willies? Truth is, I don't know. The common perception is that the 2010 Giants were greater than the sum of their parts, that everybody overachieved at the right time and all the pieces fell into place and whatever other cliché you can think of that basically says each player played an equal part in the team's success. Well, what if the magic juice the Giants drank right around September 1st of last year all came from the same cup? And what if that cup had a big ol' Mr. T necklace?

If you've ever seen Andrés Torres give a postgame interview, you know it's all about love. He loves his teammates. He loves the fans. Most of all, he loves baseball, and it shows on the field. Nobody works harder. Nobody runs harder. Nobody plays the field with more reckless abandon. He truly is the Gazelle in centerfield, gracefully gliding between the Water Buffaloes to the spot where he anticipates the ball will come down, stopping on a dime, and depositing every scorching liner in the webbing of his mitt. In 2010, he was the ultimate five-tooler at the top of the lineup — .268, .823 OPS, 56 BB, 26 SB in 570 PAs, 1 error and 7 assists in the field — and he started the year on the bench! Not only that, he's got one lovely wife. If I was him, I probably would've stolen the mic from Jon Miller at the championship rally, too. "Thank you for coming to Andrés Torres' wife's birthday party!"

When he went down with a ruptured appendix in September, I ragged on him a bit. I have a real problem with athletes taking the "tough guy" mentality way too far. Playing through pain is one thing when you've got a bruised rib or a hip pointer or any manner of injury you can't treat other than by getting all hopped up on pain meds. But to put off a trip to the ER when your gut is on fire for two weeks straight is sheer lunacy. Yes, it all worked out in the finish. Andres got better and came around just in time to help the Giants win a little thing called the World Series, but it could have been much, much worse... You can talk about "manning up" all you want. If it was me, and my life depended on my ability to play baseball at the height of my talent, I'd be getting every hang nail checked out. But hey, that's me.

Then again, if I were Andrés Torres, and I'd spent three years of my life out of Major League Baseball, kicking around god knows where in the Minor Leagues — well, thanks to B-R, we know he was in Oklahoma, Rochester, Erie, Toledo, Iowa, Arizona, and San Jose — I might be afraid to do anything that might change the roll I was on in 2010. Who knows what can happen when you go to the doctor? Maybe you find out something you didn't care to know, or maybe something you knew all along but couldn't define. I've got a fear of medical offices and hospitals. Had it all my life, really. So I understand where the dude's coming from. But even I'm know enough to recognize when the pain ain't going away... Oh well, what doesn't kill you makes you stranger, right?

Gracias, Andrés.
Posted by Butch Husky at 11:11 AM