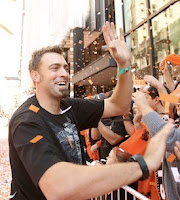 I sing the song of Jeremy Affeldt, who lost his stuff (and his job setting up Brian Wilson) but took it like a pro and delivered when it counted — down the stretch. From April to August, Affeldt could hardly get anybody out, a dilemma that stood in stark contrast to his MVP-caliber performance in 2009. But when push turned to shove, he had a solid September and even managed to save a Tim Lincecum victory in Arizona when Weezy was unavailable after working too many consecutive days. You could come up with any number of excuses to explain Affeldt's lapse in results — lack of control and velocity, hitters figuring out his slider — but the best explanation could simply be a return to the mean. After all, his 2010 numbers line up fairly well with his career line and certainly better than '09, which starts to look like an outlier when taken in the context of his full stat sheet.

Who knows what to expect from the season ahead? Will we see JA's return to dominance? A further regression? Or will he simply plateau and disappear into the ranks of the previously un-hittable, living the rest of his life off the lucrative contracts and extensions he won with momentary flashes of brilliance? Come what may, the dude deserves props for being the Twitter face of the franchise during Wilson's hiatus (and prior to the recent surge in participation from your #sfgiants). He even uses social media to promote a good cause that has nothing to do with baseball. That's a shade or two better than guys like this, who only know how to promote themselves. Give the man a follow, and remember that 2010 was hardly a perfect season, even if it did have a perfect ending.

Thanks, @jeremyaffeldt.
Posted by Butch Husky at 10:30 AM