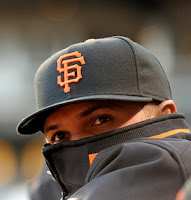 I sing the song of Waldis Joaquin, who I had the pleasure of seeing get lit up at Chavez Ravine on April 16th while on sojourn from the California Democratic Party Convention. He wasn't alone that night. The only Giant getting anything done was Geno Velez, but that was long after I'd retired to Chano's. In his four games with the 2010 team, Dub-Jay did manage to collect a hold, in his first appearance, on the second day of the season. I can't believe I'd forgotten it.

Thanks, Waldis.
Posted by Butch Husky at 8:08 AM