Countdown to Scottsdale #41: Emmanuel Burriss, IF 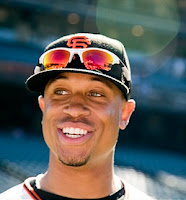 I sing the song of Emmanuel Burriss, who returned from the dead (aka the 60-day D.L.) to bat .400 down the stretch — in five ABs — for the eventual World Series Champs. In an era when African American Major Leaguers are about as rare as a magnanimous attorney or a buffalo nickel, Manny became the first product of the Washington D.C. public school system to play in the Show since 1981. I must admit to being none too pleased when he slipped into the second bagger role after Kevin Frandsen tore his Achilles in the Spring of 2008, but it's hard to hate on a guy with a smile as big as a house. Not sure yet if he's got the staying power, but I wouldn't bet against him, and I wouldn't stand in his way.

Thanks, Manny.
Posted by Butch Husky at 8:42 AM