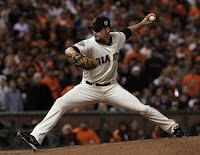 I sing the song of Javier Lopez, who came to San Francisco as a LOO-GUY (Lefty One Out Guy), only to become the most dominant and reliable southpaw in the 'pen, eventually setting up Brian "Weezy" Wilson in October. While Jeremy Affeldt was the lockdown heart and soul of the 2009 Giants relief corps, he took a significant step back in the miracle '10 season and gave Brian Sabean a little added work around the trade deadline. Of course, in situations like these, Sabes knows just who to call: the Pirates' front office. Within a matter of hours, the eventual World Series Champs landed Lopez for a couple Quadruple-A players (John Bowker & Joe Martinez), and after the addition of Ramon Ramirez, the bullpen went from potential liability to one of the club's greatest strengths. It'd be nice to think Giants brass knew all along the benefits they would reap when Lopez mowed down Jayson Heyward, Chase Utley, Ryan Howard, Josh Hamilton, and every other lefty slugger he faced during the postseason run. And maybe they did. But needless to say, some of us in the fringe were not pleased at the time of the deal. Maybe that's why we're out here in cyberspace and Sabean still has a corner office at 24 Willie Mays Plaza. Well played, sir.

Thanks, Javier.
Posted by Butch Husky at 4:20 PM