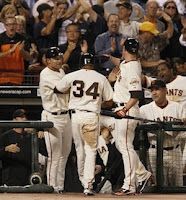 I sing the song of Darren Ford, who took second on a bunt, third on a short-hop pitch, and home on an errant throw, and in the process propelled the World Series Champs to a critical September victory. On a team with slow gaits and cranky legs, this guy's speed stuck out like a sore thumb the minute he landed at 24 Willie Mays Plaza. I can picture the "Say Hey Kid" marveling at the speed of the young Mr. Ford, musing under his breath, "You know, once upon a time, I could run just like that..." He may not be able to hit a lick in the bigs, but thanks to Bruce Bochy, we may never find out. Thanks to the New Jersey Department of Corrections, at least he's got a fighting chance.

Thanks, Darren.
Posted by Butch Husky at 4:20 PM