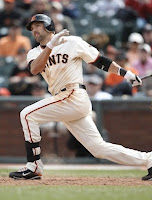 I sing the song of Mark DeRosa, who came to the Cove to make an impact with his bat and ended up doing it with his heart. Remember when DeRosa went yard on Opening Day in Houston? Neither did I! That's because the most enduring memory of Mark DeRosa's 2010 Giants season — and quite possibly his entire career — is of the guy in the black team hoodie, rushing to the top step to greet his teammates every time they did something worth congratulating. And while it's a very simple gesture, it's a gesture that can't be made if you're not in the building. When he finally succumbed to the knife, DeRosa could have easily slipped away home to sit on the fat checks our team was obligated to cut him. But he stayed, and to paraphrase John Wooden: the game revealed the character of the man. Perhaps he'll start 100 games this year. Maybe he'll ride the pine. Either way, you can't blame a healthy guy when his body falls apart due to the vagaries of time.