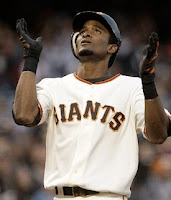 I sing the song of Eugenio Velez, who began the 2010 season as a platoon starter and ended it as an afterthought — one of those guys in the pictures of the World Series victory celebration who you'll have to identify for your grandchildren one day. In his short time with the Orange and Black, Velez became such a fan favorite that his recent defection to the Hated Ones at Chavez Ravine drew nearly as much ire as that of NLCS hero Juan U-RIBE (more on that to come). Velez — or "Count Chocula" as he came to be known by fans, bloggers, and talking heads alike — consistently impressed with his speed and clutch hitting, particularly the over-sized power he generated with an under-sized body. Few of us will forget the sight of a dude listed as 6-1/162 sending the rawhide flying into the Arcade like a Sally Struthers infomercial version of a certain juicer, er, future Hall of Famer. But even fewer of us will miss E's haphazard behavior on the base paths, his inability to play left field with even a modicum of confidence (or skill), and his uncomfortable-looking batting stance. (Don't try this at home, kids.)

One of my happiest memories of Eugenio came in a game I left early — and referenced in Countdown #42 — last April in Los Angeles. The G's had gone down early and big to the Hated Ones, and though I hated to do it, I had to return to the downtown convention center to fulfill my duties as a California Democratic Party delegate. As I inched forward in standard LA traffic on the 110, I tuned in to Doyer radio to catch the last few innings. Trailing 10-3 entering the 9th, the Giants scratched out a pair of runs and had another pair on base with two out when Velez went yuck-a-doo and launched a rally-killing homer 400-plus feet into the night. I nearly drove into the center divide in excitement, but I managed to pull off the freeway and stop the car in time to hear Renteria end the game with a grounder back to the pitcher. If the boys had pulled out a W that night, I probably wouldn't have forgiven myself...

Typically, my colleagues at McCovey Chronicles hit the proverbial nail on its head with this post shortly after Velez signed with the Doyers. I'll leave you to chew on that as we all look forward to Opening Weekend, when we get an answer to the age-old question: "How would Count Chocula look in blue?"