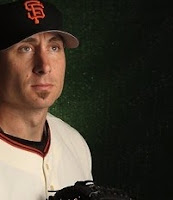 I sing the song of Brandon Medders, who looks kinda funny but pitches like he means it. Try though he did, Brandon just couldn't make 2010 his year. Luckily, the rest of the team was able to pick him up a bit. And if he's lucky, he'll even get a ring for his troubles. If he does, it might make the night of May 19th sting a little less. That's when he gave up 6 runs and a pair of jacks over one horrific inning of janitorial duty in Phoenix. The next day, Brandon was back in Fresno. The irony of his season — and likely his Giants career — ending in the ballpark where he made his name as a member of the D'backs did not escape your buddy Butch.

Thanks, Brandon.
Posted by Butch Husky at 4:20 PM