Countdown to Scottsdale #28: Matt Downs, IF 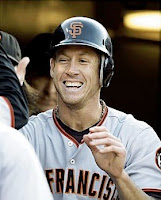 I sing the song of Matt Downs, who doubled in his last AB for Los Gigantes de San Francisco before being DFA'd in August, ostensibly to make room for Mike Fontenot on the 40-man roster. I should know. I was there. A beautiful Sunday in June. The Giants beat the A's behind three jacks, two from Aubrey Huff.  Downs doubled with one out and got to third on a sac fly before Andres Torres stranded him with a whiff. Par for the course for this 36th-round draft pick out of Alabama. He filled in admirably through a rocky May, plugging holes in a leaky middle infield that featured more hammy pulls than a rodeo — I don't even know what that means, but go with it — and he always had a winning smile for his teammates. Now, when he's walking down the street, Giants fans will smile back.