Countdown to Scottsdale #30: Mike Fontenot, IF 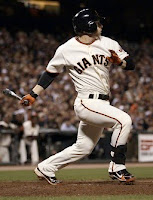 I sing the song of Mike Fontenot, the little guy with the funny face who toed the line at the hot corner and found his way into a lot of other roles down the stretch for the eventual World Series Champs. The product of a waiver trade with the Cubs, Fontenot only had to travel between clubhouses at AT&T Park to complete the deal since the Northsiders were in San Francisco at the time. (Dude even mashed a two-run double to help beat the O & B the night before.) As a Giant, this former first-round pick hit the lightest .282 a man could hit down the stretch, posting a .329 OBP and only slugging .310. Due to a lack of depth from the left side of the plate and the need to spell an overweight and overwrought Pablo Sandoval, Fontenot landed on the postseason roster and can even claim to have appeared in a World Series game — though he didn't get a chance to bat. The thought of bringing back this funky hombre doesn't exactly get my neck hairs standing at attention, but I'm willing to admit it's not a bad idea to take out some insurance on Camp Panda Redux.