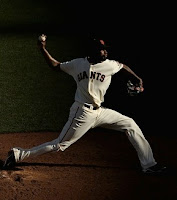 I sing the song of Denny Bautista, whose season in the Sun with the Giants can be summed up in a single lede: "The Giants designated reliever Denny Bautista for assignment to create roster space for Todd Wellemeyer, according to the team on Twitter." Now, that's not to say the dude was god awful for the Orange and Black in 2010. In fact, he posted some decent numbers. But anyone who's a fan of efficiency in baseball need not buy a ticket to see Mr. Bautista. Aficionados of strike-throwing relievers might also find themselves more than moderately frustrated with his inability, on occasion, to locate the strike zone with a compass and map. Bottom line: The eventual World Series Champs couldn't build a better bullpen around a cohort of guys they couldn't predict. They already had enough characters as it was. After they gave him the ol' DFA, Denny refused to accept an assignment to Fresno and became a free agent. He'll try to make it back to the Show with the Mariners this year. I wish him the best of luck.

Thanks, Denny.
Posted by Butch Husky at 4:20 PM