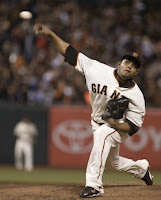 I sing the song of Ramon Ramirez, who was great when all we needed was good. The 'pen was tired. No, they weren't tired. They were gassed. The team as a whole was cruising, but each game was bruising, and entering August, everybody was playing in slow motion. In the final days before the non-waiver trading deadline, Brian Sabean dipped into his bag of tricks and started dealing. One of the pieces he plucked from the rosters of the Red Sox — and other unwitting contributors to the Giants' success — was this pitcher with an alliterate name. All he did was give up 2 ER over nearly 27 IP down the stretch for the eventual World Series Champs. He didn't have quite as good a time in October, but we won't hold that against him. After all, it turned out pretty good for us.