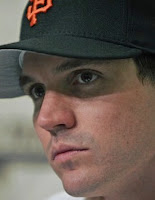 I sing the song of Barry Zito, who transferred to 'SC from UC-Santa Barbara the year after the Trojans' last National Championship and still got a bullpen named after him. Barry and I were classmates, but God strike me down if I ever came across the guy, on campus or off. I didn't follow the team all that much in those days. Didn't follow baseball much in those days. Never much cared for the A's colors — green and gold? Really? But ever since he came across the Bay, I've felt an affinity with "The Other" Barry.

Here's a perfect little conundrum that sums up the paradox that is Barry Zito's tenure with the Giants: In April, he had a WHIP of 0.88 and an opponents' batting average of .187. In September, he posted a 1.19 WHIP and a .189 BAA. Pretty similar months. So why was Zito 4-0 in April and 1-3 in September? And why did he fall apart before our very eyes when we needed him the most on the season's final weekend?

There are a lot of reasons one could cite. As might be expected, Barry went deeper into starts at the beginning of the season than he did at the end (35.1 IP in April vs. 26 in Sept.). By the end of the dog days of summer, he was ceding control of the game's outcome to the bullpen, for better or worse. In April, Zito did something he'd never done in a Giants uniform: he went an entire month (of more than one start) without allowing a home run. He gave up two bombs in September. He struck out just as many batters in September as he did in April, but his September yielded three more walks than his April. These are all minor factors, to be sure. But baseball is a game of details, moments in time that turn a game, a homestand, a season around. More often than not, those moments have not broken Barry Zito's way since his arrival at 24 Willie Mays Plaza.

But who's gonna cry for a guy making over $18 mil a year? Not me. Not you. And certainly not Barry Zito. How do I know? Because he was right there in the clubhouse crowd spraying champagne and beer on his teammates and talking humbly to the press like the professional he is. I can't help but think that's a little of the 'SC education wearing off. Wait a minute... What education? This is U-S-C we're talking about here...