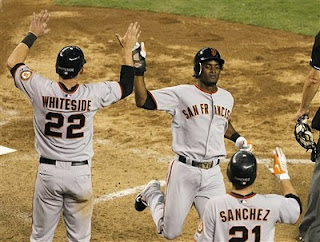 Friday: Jonathan "Dirty" Sanchez. What to do with this headcase? If he could find a way to get the first batter of the inning out... If he could find a way to throw strike one with consistency... If he could find a way to focus on making his pitch, one pitch at a time... The guy's pretty iffy, if you catch my drift. But boy, he's got some pretty stuff. I guess that's why it's so frustrating to see him exiting after six, even five innings. The line doesn't look bad, but he misses out on decision after decision because he simply cannot keep himself in the game, and our bullpen ain't exactly watertight right now. And it's not just hurting the Giants, and it's not just hurting him... It's hurting Team Hopey Changey. The guy needs a voodoo witch doctor to come into the clubhouse and exorcise the demon that walks the bases loaded with nobody out and leave behind the guy who finds a way out of that jam more often than not like some kind of magician. BTW: Where in the world did Andres Torres spend his days before emerging in the orange and black last season? Who the hell is this guy, and why did it take so long for him to become a beast? Giants win without Buster in the lineup = very good news.

Saturday: Listening to Doug Greenwald on the radio is like being transported back to the late '80s, when Will Clark was still "The Natural", and the only U-RIBE we knew was José. The guy sounds eerily like his dad, Hank, who brought me into literally thousands of games in my youth with his signature raspy voice and clear-cut call of the play. Now, with Jon Miller and Dave Flemming cavorting in Cooperstown, we get a taste of the next generation, as Doug has been called up from Fresno to broadcast this series in the desert. Listening to him call an Aubrey Huff home run gave me chills. He's still adjusting to the pace of the big league game, but I look forward to hearing more of this young prospect. BTW: The Giants are certainly acting the part of a contender: winning on the road, beating the lesser teams, and battling with the best. They won't score 10 runs very often, but they only need to score 4. When they do that, they're 47-8 (.855). That's not bad.

P.S. Butch's thoughts and prayers go out to Eugenio Velez and his family. Hang in there, Count Chocula. Humm baby!
Posted by Butch Husky at 12:32 PM