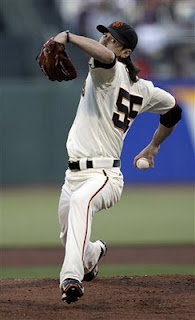 Two things happened in this one that should make us all feel tingly inside...

1. Timmy pitched his finest game of the year, a 2:11 affair that was practically over before I got to my seat after horrific and unexpected traffic on 280-N. Seriously, wtf, people? No accident. No cops. Just plain ignorant driving. News flash: It's the pedal on the right! But I digress... If this is a sign of things to come in the second half from our two-time defending baddass, then both the Giants and my fantasy team should be in the hunt come September.

2. Pablo got an extra base hit — not to mention a 2-out hit with a runner in scoring position. He didn't do much after that, but his bat looked pretty lively, even while striking out his third time up. It's not a large sample size, to be sure, but I like the attitude of "throw the first half in the garage" and focus on the days and weeks to come. We need this guy hitting on top of his game. If he doesn't snap out of the malaise he's been in since April, then Timmy could turn into Walter Johnson, and we still won't be playing in October.

P.S. Made a sojourn to the Dugout Store after the game and picked up a Steal Your Face long sleever. Getting geeked up for Jerry Night at the Cove!
Posted by Butch Husky at 4:36 PM