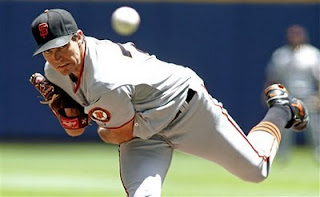 One hour until the boys face off with rookie phenom Stephen Strasburg, so I'll make this a quick one... If anyone has any ideas for how to stop Buster Posey, they may want to forward them to the rest of the National League — particularly the Milwaukee club — because this kid is getting downright abusive. You can point out that the Brew Crew has hit a serious lull in their enthusiasm for the game of baseball, and that they did everything they could to give this series to the Giants. (Ken Macha had better be dusting off his résumé as I write this.) But like I said before, good teams take advantage when breaks come their way, and the cumulative series score of 36-7 is great news for the bats as well as the pitching staff, both of which abandoned ship during The Losing Streak. Some quick hits: The only person Zito should be pissed with is himself. That was one craptastic performance after being gifted a rare 6-0 advantage. Also, you can mark my words, Aubrey Huff will go down as one of the best moves of Brian Sabean's tenure with the Orange and Black.

Going off the grid to attend a friend's wedding in Humboldt this weekend, so you'll be without my witty asides for a few days. Hope you can find the strength to press on until Monday. If you're lucky, I may have enough 3G reception to update the ol' Twitter thingy, so stay tuned to @ArcadeDreams.
Posted by Butch Husky at 3:15 PM