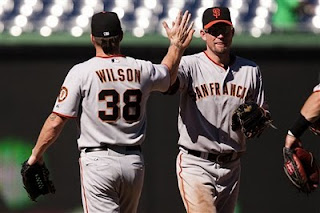 As has been noted on the Twitter and Facebook thingies, I spent the past weekend at Stillwater Cove just north of Bodega Bay attending the long-awaited wedding of a couple good friends. Cell reception was non-existent up there, and even my iPhone data plan wasn't happening, so I didn't get to watch any of the series in D.C. — including the Strasburg game. However, I did have my trusty pocket radio tuned to the ol' 50,000-watt blowtorch nearly all weekend, and now that I've had a chance to watch the highlights, I'm ready to make a few observations about the series:
I'll have more for you later including my first half report card and a look ahead to the second half. For now, I'll just say that the G's may have salvaged their season on this road trip. You'll recall I was none too optimistic following the 15-inning heart crusher in Denver — which eerily mimics my sentiments following a particularly rough series at Coors last year. The boys pretty much needed to win out going into the break to have any shot of catching anybody in the West, which they pretty much did. Meanwhile, the Fathers ran into a streaking Rock Pile over the weekend, and suddenly, the deficit is only 4 games. Of course, we've got three teams to climb over, but things were looking a lot worse a week and a half ago.
Posted by Butch Husky at 3:50 PM