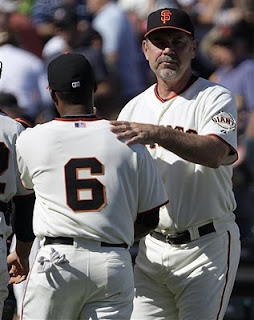 Instead of reflecting on Monday night's game while my head is still throbbing from beating it against the wall, I offer you the following history of Sunday's contest via my Twitter feed. Do check it out and give a brother a follow while you're there...

2:26 PM
Back up again after issues with AT&T Park WiFi. Ironic considering I rock an iPhone. Anyway, back to the game... #sfgiants

2:34 PM
@sfgiants Can we hear some "Good Vibrations" on the #SFGOrgan?

3:03 PM
Shotgun gave us just what the doctor ordered today. This rotation needs a leader. Cain might be the guy. #sfgiants

3:17 PM
Well, I always like to be there when the season ends. #sfgiants

3:22 PM
#sfgiants and #Padres with dueling four-game slides. G's could be on the verge of being 2 out. Could be.

3:26 PM
Guillen's had all kinds of chances to make up for beefing that 1st inning popup yesterday. He just came thru big time. #sfgiants #BeatAZ

3:32 PM
First time I've seen the McCovey Cove suite unoccupied. Might have to run a guerilla maneuver and bum rush the joint. #sfgiants

3:48 PM
SURGEON GENERAL'S WARNING:  #sfgiants baseball may be bad for your health.

3:55 PM
Even my usher is ripping Bochy for his machinations. I usually cut him some slack, but why put Wilson in Nate's spot & not Ross'? #sfgiants

[Butch's note: That last one turned out to be a prophetic tweet.]
Posted by Butch Husky at 4:14 AM