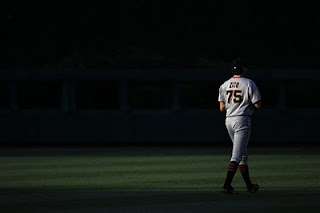 It's getting serious now. The gap is widening. The Fathers are playing cupcakes. Los Gigantes are struggling with winning teams. The starters are 0 for their last 13 with an ERA approaching 6. And last night, hours after I lauded the bullpen on this very blog, they suffered a monumental collapse and let the Phils blow a close game straight to hell. No chance for a 9th-inning miracle. No joy for long-suffering fans of the Orange and Black who should be poised to go on suffering if the trends of this roller coaster season continue to play out. Right now, the team is 14 games over .500, right where they finished in '09. If they can manage to post a winning record the rest of the way, they could be said to have "improved". But truthfully, in this division, with this talent in the rotation, true improvement means a pennant. Absent that, this is a lost season, and anyone who tries to put a rose on it is selling you something. I know most pundits predicted a middle-of-the-road finish for the China Basin 9. But those of us with a couple drops of faith left in the tank saw modest improvements, a couple stout prospects on the way, and a never-say-die attitude and thought, much like the construction worker in Major League: "These guys ain't so f**king bad." Now, we're starting to sound like the Japanese groundskeepers from the same movie: "They're still sh**ty." So what's it gonna be then, eh, Giants? Another season to forget, or a resurgent race to the finish line? God help me, you know I'm praying for the former. But the latter appears increasingly more likely with every passing day and every minor disappointment...

> War Jose Guillen. No, I did not want him. Yes, I'm glad to have him. At least with him in there behind Posey, Huff, and Burrell, the lineup doesn't look so... weak. If Panda continues his gradual rise from the realm of mediocrity, we might actually scare a few pitchers down the stretch...

> I'm not gonna rag on a guy who's been the obvious MVP of the club since April, but it looks like having to carry the team for the first three months of the season is finally catching up to Aubrey Huff. Let's hope he catches a second wind sometime on this road trip, because we're surely gonna need his bat to make a run...

> I don't know how serious Chris Ray's injury is, but it's awful dubious to get lit up one night and find yourself on the DL the next day, just in time for a rehabbing teammate to return to the 25-man roster (see Affeldt, Jeremy)...

> Quick hit: Barry Zito gave up more runs in 5+ IP last night (4) than the Giants' staff allowed in a three-game series at Citizens Bank Park last September (3). FYI, they lost two of three in that '09 series...