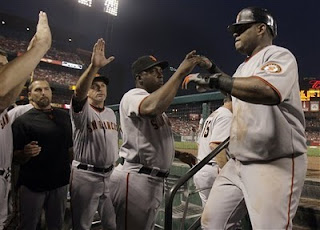 I've said it before, but so much in baseball can hinge on one pitch. Last night, the pitch that stood out was the changeup low and out of the strike zone that Pablo Sandoval absolutely nutted into the Cardinals bullpen in right center. It didn't give the Giants a lead, but it did extend their lead. It was a solo shot, so Jake Westbrook avoided a crooked number. But in the context of the season, that pitch and the swing Sandoval put on it meant a whole heckuva lot. Baggs has already opined on the subject here, so I won't regurgitate his stats and observations. From the perspective of a fan who watches most of his games from the couch, it's clear that Pablo is slowly but surely becoming the Panda once again. In his last ten games, he's hitting over .300 with four jacks and five RBI. Two days ago, he laced his first homer from the right side of the plate since September '09. And last night, he fell behind 0-2, fought back to a full count, and crushed a pitcher's pitch outa the park. It's upsetting that his defense has seemingly waned as his offense has improved, but honestly, I'll take that trade off. The Giants have been among the best defensive teams in the league all year, and when they score four runs, they're virtually unbeatable. They're not a perfect team, so they have to distribute their resources as efficiently as possible. Am I ready to say that Kung Fu Pandamonium has returned? Not quite. Too small a sample size. But it's a nice sample nonetheless, and it's encouraging that it's happening at just the right time. As the pitching staff begins to tire in the season's final weeks, we'll need some offense to back them up. Sandoval, Sanchez, Burrell, Huff, Posey, and yes, even Guillen need to be on top of their respective games, because if we can't count on Timmy, we need to mash... 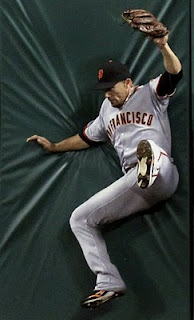 > How freaking awesome was it to watch Madison Bumgarner go right after The Great Pujols? Albert progressively got a better look at MadBum's stuff, eventually blasting one out to deeeeeep left center after Andres Torres robbed him of a double at the centerfield wall. But Bumgarner stole the show tonight. I dare anyone to prove to me he's not the ace of the staff right now...

> Sergio Romo seems to have secured the eighth inning gig — for now. No telling if his mini-implosion last night will affect Bochy's late-inning choices, which are already due up for review with Jeremy Affeldt's return to a clean bill of health...

> The sequel to last night's Kung Fu Panda Redux was the Return of the Huff Daddy. Nice game for a guy who's my age yet looks twice as old. And according to Baggs, it was all my buddy Pat Burrell's fault. Be sure to check out the off-day story on these two and the blog that followed. Classic stuff...

> I don't know about you, but seeing Pedro Felíz in another uniform always makes me feel... grateful...

> I have no problem with José Guillen wearing the sacred No. 6, provided he produces with his bat and throws out at least a half a dozen guys trying to stretch singles into doubles. It's obvious his legs are not what they used to be, but that's nothing new for a Giant wearing the 6 jersey. I know I said some nasty things, but so far, so good for the newest Gigante...
Posted by Butch Husky at 1:08 PM