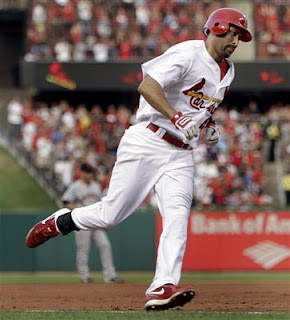 Some quick hits before Breakfast with the Giants...

> It was shaping up pretty nice for Timmay after three, but Randy's Revenge really shook him up. It may have taken an inning to catch up to him, but he got rattled. He went from that steely eyed, overconfident bundle of limbs to the sweaty ball of goo that's taken the mound oh too many times of late. According to the kid, he's on track, feeling better out there, more in control. But the results just don't show it. I can't stress this enough: Every projection of the Giants' season hinges on Tim Lincecum being Tim Lincecum. If he's not, nothing else matters...

> It seemed like P-Happy was all over the place last night for the Cardinals. A run-scoring triple that easily could've been scored a double with an error on Pat Burrell, but I'm not gonna complain about that one. An RBI single off Mota late in the game to seal the deal. Then there was Pedro's glove. He's got such soft hands. He always has. Even when he was barely hitting above the Mendoza line for us, he could always play the field. Yeah, I guess it's safe to say I miss the bastard...

> For the first time, I had the laptop propped open during a road game, watching the Gameday of Padres at Brewers while the Giants telecast played out on my 47" HDTV.  The Pads game was a little more of a contest, so my attention was drawn to my 17" MacBook Pro. I imagine it'll be like this the rest of the way, especially when I'm in France in a few weeks. More to come on that...

Barry Zito will be Baked Zitti today in the St. Louis heat.
Posted by Butch Husky at 9:40 AM