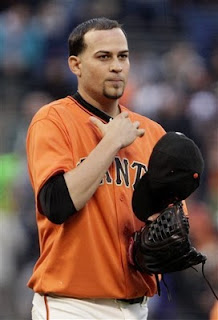 Nice one, Dirty. We stake you to a 2-run lead. You give it back. We put two runners on ahead of you. You bunt it back to the pitcher. A suggestion from a guy who still begrudges Dusty Baker for handing Russ Ortiz the game ball: You can't guarantee a win in team sports. But if you happen to get overanxious in the postgame presser and say something you should probably have kept to yourself, the least you can do is keep a clean sheet for your part in the contest. Failing to do that, you get my Razz of the Day. I will, however, note that your performance was much improved overall, and my fantasy team thanks you for it. Btw, #TeamHopeyChangey is still in the cellar of the middle of the league. Get that? Short post today because I have to run out the door and walk precincts. I think when this campaign is done, I'll get GOTV tattooed on my arm...

> Seeing Aubrey Huff take Clayton Richard the opposite way for an RBI double in the first was like a vision of happiness. Defenses have been employing the "Barry" shift on Huff Daddy pretty much all year, but the guy can hit to all fields, so I don't really see the point. It's also striking to remember how rarely the man for whom I name the shift did this very thing, even in situations where a bleeder to the left side would score the winning run...

> As I said on the Twitter thingie, this is not the end of the world. We still have two games left in this series to jump back into the race for first. It's all about winning series from here on out. We do that, we'll be golden...
Posted by Butch Husky at 11:25 AM