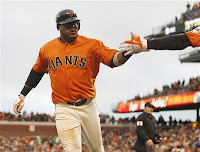 FRIDAY: It's an adventure every night with this team, B-Weezy back spasms or not. But for some reason, this time, I wasn't worried. Even as the tying run moved into scoring position, I felt deep down in those places you don't talk about at parties that the boys were gonna pull this one out. I brought a kazoo to the game, an orange one. It debuted on Monday, but I really let it out on Orange Friday, blaring in the ears of unsuspecting Doyer fans. After a few innings, I began to recall the last time the Hated Ones came to town. I said some really awful things to some blue-clad fans that warm evening in late June. I eased off on the kazoo, stopped telling every other person in an Ethier shirt to "Go back to your smog-infested shell of a city." I let them be. And los Gigantes rewarded me with a W. How did I know they would pull it out? Because in the top of the 9th, I had my mouth hermetically sealed shut. BTW: War Juan U! RIBE! for still being a baddass, but this game belonged to Aubrey Huff. Two-run double, Arcade homer, two great plays from both corner outfield positions. Can you spell M-V-P? Buster Posey... 1-game hitting streak. 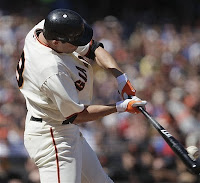 SATURDAY: When Pat Burrell connected on his eighth inning bolt of lightning into the glove of a lucky fan roaming the bleachers, the multitude of images, memories, thoughts, and feelings that splashed across my mind would have been enough to fill an entire volume of the Encyclopedia Britannica. My instincts told me to join the rest of my 42,000 friends in attendance and jump for joy, explode in a rage of happiness and inchoate ranting. But I had to keep all but the briefest of bleats tucked neatly inside my soul. Why? Because I had the honor of sharing a luxury suite for the final 2+ innings with a local VIP, and while he would not have cared if I'd screamed bloody murder, I had to respect the austerity of his guests. It hurt so much to hold it inside as my former high school classmate rounded the bases in a moment that all of us there knew instantly would be carved into the storied history of this rivalry, to be repeated to our sons and daughters, to their daughters and sons. It hurt so much  had to cry. And when I did, I was thinking of my father, and his father. It's a family thing, you see. BTW: I'd have to be a galdarned idiot not to realize the eerie symmetry between this game and the Sunday afternoon affair at Chavez Ravine following a bitter floor battle at the California Democratic Party Convention on April 18th. On that day, oh so long ago, Barry Zito threw seven scoreless, and he was dealing like he always does in that yard. But he was being matched pitch for pitch by Clayton Kershaw, until U-RIBE! shot one into the left field pavilion. Part of me wanted the game to end 1-0, but the other part — the dominant part — knew that it wouldn't. So when Zito walked Garrett Anderson and Romo came in to give up the ghost to ManRam, I sat there and laughed. To keep from crying. I could sit here and draw the parallels, but I'll just say that this was Zito's redemption, even though he didn't figure in the decision of either game.

SUNDAY: I'm going to try very hard not to get excited. I'm going to do my best not to fly off the handle and make bold but uneducated predictions. I'm going to bite my tongue. But this is getting to be pretty f***ing fun, and the fun's only beginning. I remember the last time we swept the Doyers at the Cove. I remember because at the time I was working as an usher in Sections 219 & 220 on the Club Level. Great view up the first base line out toward the archways. I got to watch J.T. Snow do his bizniss every day, and they paid me $11 an hour to do it. Good union work. On the day we completed the sweep, the Giants were absolutely blowing those pricks out of the water, and I had to deal with the one and only fight in my section the entire year. It was started by a Doyer fan who — as fate would have it — was from San José. I don't know what pissed me off more: his team of choice or that he could've been my neighbor. Or maybe it was having to stay an hour after the game to fill out a report, and then another, and then another. All because some Giants fan sprained his thumb in the altercation. I remember trying to get between them before it happened. My fans may have thought I was trying to protect them from drunken violence. Truthfully, I just wanted them to cool it so I could watch the game and get home on time. BTW: How does Edgar Renteria do it? Every time the fans — yours truly included — start calling for his head, he turns around and does something that makes it impossible for us to hate him (see: Opening Day, grand slam vs. Rockies in '09). War Matt Cain. He earned that W.
Posted by Butch Husky at 7:33 PM