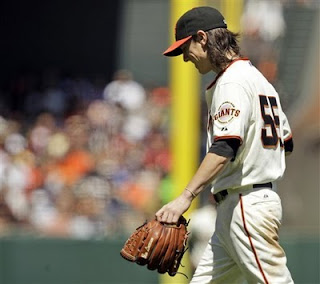 Four games is nothing. We can make up four games, but not if we can't do one very simple thing: Beat the f**king Padres! Seriously. This is not hard. The Diamondbacks do it, the Dodgers do it, even the Rockies do it. Why can't the Giants? Are they in our heads? Do they know better than us how to win in our own park? Do they put some sort of voodoo curse on the visiting clubhouse whenever we visit their Dog Park? Is this some kind of cosmic joke on Giants fans? Or is it karma for all those years of walking in and flat out owning Jack Murphy nee Qualcomm Stadium — both on the field and in the stands? Probably all of the above. But it doesn't matter. We have to beat these guys, or we're not going anywhere this season. Seven games left, three in our house to close the season, and every one of those games is HUGE. I'm calling it right now: The Orange and Black MUST win at least five of these seven remaining games with the Friars to have a chance to win the West. We can drop six of seven and still back into the Wild Card. But that scenario is too dependent on the performance of other teams, and I don't know about you, but I couldn't stand making the playoffs without having proven that we can (at least) compete with the best team in our division. Plus, it's incredibly possible that we meet them in the NLCS. (Let's call that scenario "Butch's Worst Nightmare.") So the long, short, and in-between of it all is this: Beat the f**king Padres. Of course, it'd be nice to win at least a couple games on this roadie to the hot-and-humid infernos of Philly at St. Lou, but let's not ask too much of the Mudville Nine. They've already got enough to worry about...

> As Mychael Urban said on Sunday afternoon's Sportsphone, it is officially time to start the worry meter on Big Time Timmy Jim. Whether or not he snaps out of this funk could determine the course of these final 43 games. My worst fear that will likely prove true: The kid slacked on his conditioning during the offseason — "Puff, puff, give..." — and has already run out of gas. If that's true, he's done for the year, and we may as well not make the postseason. I have to imagine if it truly was a mechanical problem as Tim suggests, Big Daddy Chris would've pulled a Father Knows Best and corrected his ultimate creation by now. To be continued after Saturday's start in the St. Louis heat...

> Much I love his defense and have his career numbers memorized, I have to say Freddy Sanchez looks like absolute garbage right now, and he's said as much as well. Good thing someone went and got this Fontenot guy to shore up the middle infield, especially with Edgar back on the mend. And I have to give a shoutout to the Chron's John Shea, who tweeted his ideal lineup following the Guillen acquisition with Buster in the two-hole. Nice call @JohnSheaHey...

> In the midst of this crushing series loss to the Fathers and a 12-game winless streak for the starting staff, I'd be remiss to ignore the fine work of the Giants bullpen of late. These guys have really plugged the leaks and kept us in this hunt, and it's due in no small part to the reinforcements brought in my Sabes and the brass before the deadline...

> Good to see Bochy's been reading my Twitter feed. Anyone else think U-RIBE! should've bunted in the bottom of the 11th on Saturday?

> Would've meant more in terms of momentum if they'd closed out the series with a W, but Saturday's win was absolutely crucial. Without it, we're staring at a 6-game deficit and probably thinking Wild Card. And the crown jewel of Saturday's comeback was that it happened against the vaunted San Diego bullpen. There ain't nobody gonna tell me our boys lack heart, perseverance, and determination. Unlike years past, we are never out of a game, no matter the deficit, because the 2010 Giants just don't quit...