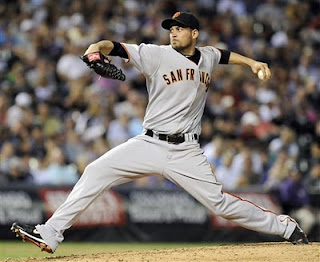 Two days in Colorado, and I have to admit, I expected the reverse result. You tell me Jonathan Sanchez is pitching at Coors with career splits against the Rocks resembling Atlee Hammaker's career stats, and I chalk that up as an "L". To more acutely express my feelings about the matchup, I held "Dirty" Sanchez off my 25-man fantasy roster on Tuesday. While the Giants fan in me was pleasantly surprised by the W, the fantasy player in me was ready to leap from a very high balcony if Dirty had been able to complete the shutout. Luckily for Team Hopey Changey, he faded after six — once again — I only ended up missing out on 17 points and an ERA boost, and los Gigantes were victorious. Drinks all around... Jokes aside, you have to be pumped by Sanchez's performance considering how much he'd struggled before the trade deadline. His postgame quotes hinted at it, but I'd go so far as to pin the secret to his success in Denver on comfortability. Remember, this is a guy who has a general problem with focus. Throw in a healthy dose of job insecurity and the thought of picking up roots and heading to another franchise, and you've got a nervous breakdown waiting to happen out there on the bump. As it stands, Dirty and the rest of the team got a big boost from the Giants' (lack of) moves on July 31st, and that will only serve the clubhouse chemistry well down the stretch. BTW: What the hell am I s'posed to say about yesterday? I didn't listen to the postgame show or Sportsphone with F.P., but I'd guess the Negative Nancies were out in full force with their vapid arguments about the need for a big bat and more pitching depth. Friends, sometimes a loss was always gonna be a loss no matter what team you threw out on the field. Ubaldo was due, the Rocks' bats had been on fire prior to Tuesday's anomaly, and Bumgarner had been pitching well over his head for a 20-year-old rookie. (Now, he's winless as a 21-year-old.) Add all that up, and it's a series split. We do the same in Hot-lanta, we'll be sitting pretty when we get back to the Cove... Did I mention the Pads have lost two in a row to the Hated Ones? I'd never (openly) root for the boys from Chavez Ravine, but I'm not gonna sit here and tell you those results don't warm my heart — just a bit.

P.S. Headed up to Berkeley for three nights of Phish at the Greek Theatre, so the tweets and blogs might be slow going for the next few days. Hope you'll bear with me.
Posted by Butch Husky at 12:55 PM