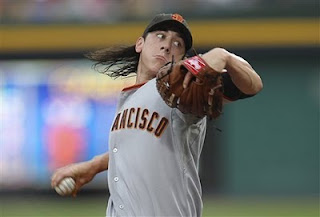 Two pitches. That's all it takes to lose a game. So how'd you like to be a starting pitcher? For what it's worth, we all know Big Time Timmy Jim has issues with the heat, especially east of the Rockies. Hell, I can't blame him. The humidity is brutal. And if he hadn't been forced to run the bases in the second after Pablo's a late break from second on Timmy's sac bunt attempt, who knows? Maybe he comes out in the bottom half and sets down the side in order, gets in a rhythm, and coasts through seven strong. Maybe he doesn't allow the jack to Gonzalez and another to Hinske — wall-scrapers, both of 'em. Maybe the offense piles it on in the second and puts the game out of reach. We know for sure it would have led to at least one more run on Torres' double. But if you know me, you know I'm not one to play "What if..." This game is about results, not hypotheticals, and nobody ever won a game on a do-over — though that Mets game a few weeks back made Butch think about petitioning MLB for a rules change. As it stands, not the worst loss of the year, but definitely one of the worst performances with RISP that we've seen from the 2010 club. I'll tell ya right now, one hit with RISP and 9 LOB is not gonna git 'er done in October... BTW: "No, no, no, no, no, no, no no!" No, this is not a Bohemian Rhapsody reference. It's what I would've said had I been in the room with Giants brass when the subject of acquiring Jose Guillen came up. I'm not a fan of clubhouse cancers, and A's fans should know well enough to steer clear of this loser. I don't care how good his stats look or how quick a bat he swings. If we didn't make a move at the deadline, we certainly should not make this one... War Gerald "Buster" Posey for cleaning up the POTM awards from MLB: Player of the Month, Rookie of the Month, Clutch Performer of the Month. Why not combine them all into the Rookie Clutch Performing Player of the Month? That way, BP can save some space on his mantle for the awards sure to come in his future (ROY, GG, MVP?).

P.S. Great first night of Phish at the Greek, even though I didn't get in. Heard the whole gig from the berm behind the venue. God bless Berkeley! Possum, Wolfman's, Divided to open it up. DwD, Free, Tweezer, Fluff in the second set. Looking forward to getting in tonight. Wish me luck!
Posted by Butch Husky at 2:46 PM