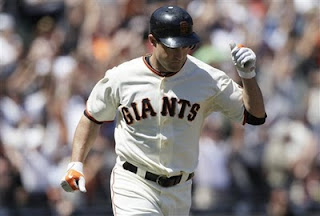 So it begins: Showdown Series, Guarantee Weekend, How The West Was Won... Doesn't matter what you call it, this visit from the Fathers is freaking HUGE. But it wouldn't mean quite as much were it not for one man: Pat Burrell. At the risk of turning this blog into a Pat the Bat lovefest, there is now officially no way to deny the positive impact this scrap heap signing has had on your 2010 San Francisco Giants. Let's talk about the GWRBI in three of the last four Gigantes victories — and it woulda been all four had the over-taxed bullpen not blown the 4-run lead provided by my high school classmate's emphatic fifth-inning grand slam. Let's talk about clutch late-inning home runs to beat the Hated Ones, and then the Cubs on Wednesday night — with Butch in the house! Let's talk about critical sac flies (the most underrated stat in all of baseball) to beat the Braves last week and those same Cubbies on Monday — again, with yours truly cheering him on from Section 104. Let's talk about professional at bats, a strong arm in left field, and a winning attitude. Let's talk about how Pat's signing jacked up Aubrey Huff, his former teammate at The U. Most importantly, let's talk about how Brian Sabean continues to confound his critics by pulling players like Pat out of his ass and watching them turn into difference makers. I'm talking about Kenny Lofton, Randy Winn, Juan Uribe, and now Burrell. Much as I abhor the acquisition of Jose "Cancer" Guillen, I have to stop short of bashing the move until we've seen what it yields. Hell, for all we know, Guillen will have a game winner down the stretch that proves to be the difference between playing baseball or golf in October. So put away your Lunatic Fringe membership cards for one day and do what our good buddy Jeff Kent says: "Watch the game." Who knows? You might see something special...

> War Pablo Sandoval. First homer since mid-June. A splash hit, no less. Match that with a pair of shots to Triples Alley in the final two games of this series that would have been out of any other park, and you've got the makings of a possible re-birth. But I'm gonna stop right there, because we've heard it, seen it, felt it before, and Panda version '09 has yet to make an appearance...

> I'd love to sit here and bitch out the 'pen for "blowing" Matt Cain's 10th victory and "wasting" Pat's granny, but how can you hate after the week they've had? Relievers have taken the decision in each of the last 9 games, and between a pair of extra inning contests and a bevy of abbreviated outings from the starters, these guys are taxed. Ironic that Bochy went to a 7-man 'pen to add some bench depth right before this tenuous stretch. But it looks like reinforcements are on the way in the form of Jeremy Affeldt and "Big" Dan Runzler — both tossing for the Baby Giants this weekend...

> Amidst all this Pat the Bat insanity, I'd be remiss if I didn't check in on another Bellarmine alum — and fellow Willow Glen native — who once wore the orange and black of his hometown team. I'm referring, of course, to Kevin "Franny" Frandsen. Unfortunately, Franny is currently plying his trade at the AAA level for the hated Los Angeles Angels of Anaheim in Orange County Near the Airport (A Huuuuuuuuuge Toilet Bowl). Before his demotion, he was hitting .288 in 139 ABs for the big league club, with 11 doubles and 13 RBI. Also of note: 9 BB and only 6 Ks. Right now, he's batting .266 for the Salt Lake Bees. I will keep you posted on his movements...

> Can't say I was all that geeked up by Jonathan Sanchez's bulletin board quotes following his shellacking in Atlanta on Sunday. I've never been one for guaranteed victories because there are too many variables in sports to make these guarantees anything more than sheer bravado, especially in baseball. IMHO, you take care of your business and leave the talking for the broadcasters and beat writers. Let's hope Dirty didn't light too big of a fire under the Padres' collective ass...