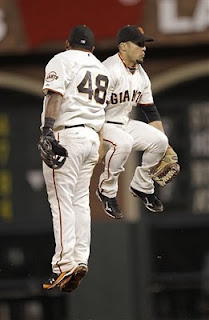 Here's the thing about Monday's game...

It's irrelevant. Yeah, I know what I said on the Twitter thingie. I said a lot of things that night on the Twitter thingie. Another one of the things had something to do with not playing the Blame Game. So let's not play the blame game. Let's look objectively at what happened:
These things happen. As my buddy Alex opined on his Twitter thingie: "It would be super if Freddy Sanchez could figure out how to hit and field at the same time." I'll take the hits any day, and especially on a day when we only give Dirty one run of support. What a workout.
——

You know, the local media seems to be picking up this narrative of the Giants as a team that lacks an identity. Personally, I think they're all on crack, and this game is a bright shining example as to why.

The 2010 Gigantes are the Teflon Team. They're as resilient as Silly Putty. If the 2010 Giants were an ice cream flavor, they would most certainly be Rocky Road, but the good kind, with just enough marshmallows to make you crave another bite.
——

And cheers to Alex Pavlovic, one of the unsung heroes of the Giants beat, for his work in relief of Señor Extra Baggs. Check out his notes on Darren's debut. Am I trippin', or was that kid playing in San José last year? Wait... oh, right.

Critical win for the team. Existential victory for Big Time Timmy Jim. And a sleepless night's worth of "What if's" for one Ubaldo Jimenez. Seriously, if that kid don't win the Cy this year, there ain't no justice in baseball. Meaning he probably won't.

And me? I had to watch it all transpire on my iPhone. It's a cross I have to bear for being "engaged": MFTs* of events, networking, drinking, more networking, and occasionally getting things done that can, you know, help people. Oh snap, now I'm bitching. Back to the rawhide, shall we?
—— 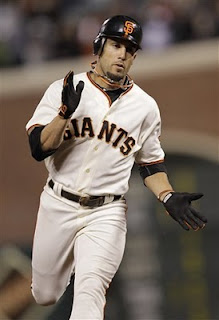 > I freaking love Andres Torres, not in a man crush kinduva way, more like I want to buy him a case of whatever liquor he fancies. Dude is ripping it up out of the clear blue sky, both for my real team, and my fantasy team. I'd nominate him for Comeback Player of the Year, but he never really got a shot in the first place. Listen to me now: Take your kid to the park. Point out Andres Torres. Make sure they watch him the whole game. That's how you play this game — like there's a fire in your soul and ice in your veins.

> Speaking of #TeamHopeyChangey, we were well represented by los Gigantes in this series. Both Dirty and Timmy turned in fine performances above and beyond recently-lowered expectations, and A.T. went nuts at the plate and in the field. We're not exactly shaking up the standings, but we're steadily making a push for the money. Fingers crossed.

> Yeah, I know. We could "What if" ourselves to death. I think I said that, or maybe it was some other jackass blogger. Anyway... The Padres have lost seven straight games. Bolly for us. We've managed to claw back within 3 games of the West lead. Again, bolly for us. Could the G's have done a better job of dispatching the Reds last Wednesday and the D-backs over the weekend? Maybe so, maybe not. They're both lighting up all comers right now. All I'm sayin' is if our boys had TCOB, we'd be a lot closer to the promised land, and 3 games is a serious gap with 28 to play.