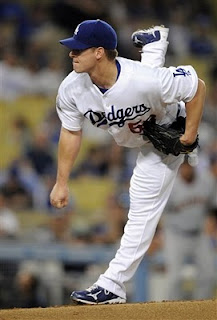 Chad Billingsley is not related to Barbara Billingsley, so far as I know, but Mrs. Cleaver's namesake certainly knows how to make mincemeat out of los Gigantes. Looking at it objectively, our boys got one-hit tonight, and they were lucky the hit came with two runners in scoring position, or they may have been shut out too. Another Friday night, another wasted Padres loss. We simply can't expect the Fathers to continue to deteriorate. We need to win some games in big chunks. Now is the time, if there ever were one. Would've been nice to start the roadie off with a W, but every now and again, each of us runs into our own personal Chad Billingsleys. For some of us, it's the DMV, for others, the IRS, and for some unlucky souls, it's a local parking attendant. For the Giants pitching staff, it's Rod Barajas. But the secret to success does not consist of regret. It requires a short memory, a stout spirit, and a hang loose attitude. I've said it before, and I'll say it again: this team has all of that in spades. And since I know that — win or lose — they have the heart of a champion, I believe the boys will rebound tonight and lay waste to Los Angeles, particularly Casey Blake, who is quite the douche bag. They better, 'cause I'm cutting my band rehearsal short to make it home in time for first pitch.

> Andres Torres looked straight up lost out there last night, but he wasn't alone. Didn't seem like anybody had a clue aside from Busta Posey, who added to his ROY resume with a clutch two-run knock, and Pat Burrell, who walked twice. (It would've been thrice were it not for a few questionable strike calls.) Back to the point: A.T. is in a bit of a slump, and the offensive engine don't work without the spark plug...

>  Jose Guillen. Yikes. Dude got screwed on a called third strike that was, well, not a strike. But he may have been thinking about what could've been a shoestring catch on Billingsley's two-out, two-strike, two-run single in the 4th. Bottom line: even if Zito gets out of that inning — which he probably didn't deserve to do — the offense still had to get another run, and they looked woefully incapable of delivering.

> What's up, Barry? You usually start out like shit and go lights out in the second half. This year seems like you're going in reverse. Not cool, dude. We need you down the stretch. Nice effort from the bullpen. Four shutout innings with very little trouble, ahem, Santiago Casilla, ahem...