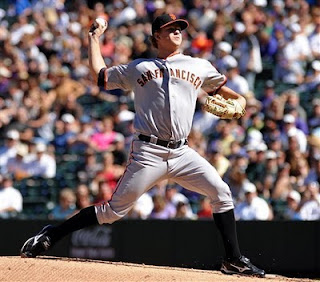 It comes to this. One week of desperately trying to avoid a heart attack and knowing it's a losing proposition. After all, it's been six years. How exactly is one supposed to react under these circumstances? I find myself pondering what life in September must be like for fans of teams like the Pirates, who haven't won diddly squat (or even bothered to post a winning record) in 18 years. Football season. That's what it feels like. Not here. The Niners are garbage. The Raiders are... the Raiders. The A's are playing out the string. And the W's and Sharks have yet to begin their respective marches toward inevitable heartache, regret, and mediocrity. (Just sayin'.) Yes, your San Francisco Giants have a unique opportunity to usurp the collective sports consciousness of the Bay Area for the next five weeks. The last team from these environs to play in their league's postseason was the Warriors. I know. Scary, right? It's been one sad state of affairs for jock junkies in this neck of the woods, and it's a shame. After all, we have everything else going for us: culture, diversity, climate, politics — why not a successful sports franchise, or hell, just one bloody season in the sun. That's all we ask. For Giants fans, it's the ultimate existential question: If our team can finally find a way to overcome the Ides of October and end up hoisting the cool trophy with all the pennants on it, will we be satisfied? Will we walk away into the sunset, never again to set foot in a major league baseball park, our wildest dreams fulfilled, ready to experience what life has to offer beyond the chalk lines and $8 brats? Will our family get to see us again at birthdays and holidays and graduations? Will our friends be able to discuss subjects with us that don't revolve around the designated hitter or the infield fly rule? Will we stop wearing our beat-down ball caps to weddings and high-fiving fellow fans at political fundraisers? Will we ever, truly, be sane? The answer, of course, is "No." Because we can never get enough, you see? One championship feeds the hunger for another. Take Red Sox fans as an example. Two championships in three years, and they're still the bitterest, saddest, most depressingly paranoid body of people on this planet — and anyone who came to the interleague series at the Cove in June knows exactly what I'm talking about. That's us, people. Two or three years removed from that mythical Giants championship, we'll be just the same: mumbling to ourselves about what could have been, should have been, would have been. If only... if only... But for that one October, it truly would be magic inside. Of course, this year, the World Series is scheduled to stretch into November, unless somebody sweeps. But you get the point. Don't you?

> Everybody seems to be talking about the starting rotation. Urbs says "Let's push Tim Lincecum back so he starts the Padres series and Zito goes against the D'backs." Baggs says, "Let's move Timmy up so he's available to pitch Game 163 on regular rest." Chalk me up with the guys on the bench, who don't seem inclined to change a thing. Like Baggs concludes here, why mess with a staff that's held opponents to 3 or fewer runs in 19 of the last 20 games? Of course, Baggs later reported that Brian Sabean was on KNBR yesterday talking about the possibility of migrating Big Time Timmy Jim to have him rested for a one-game playoff. So who the hell knows what's going to happen? I can tell you this much: Whether the Giants are playing baseball or golf next week has more to do with one player than any other: Jonathan "Dirty" Sanchez, who will likely start two of the final six games, regardless of how the rotation shakes out. Would it be any Giants fan's ideal to have Dirty on the mound with the season on the line this Sunday afternoon at the Cove? No, but we may have to endure it anyway. And given his recent success and lifetime numbers against the Padres, we shouldn't be that worried. But we are. After all, this is the Giants we're talking about here...

> How hard is Andres Torres? Dude plays for two weeks with appendicitis, then sits for a grand total of 12 days before returning Friday night — and starting Saturday! He even blasted one into the Rockies bullpen to prove that our own private Roy Hobbs was back in the saddle again. Of course, he tweaked himself pretty good, playing hard like he always does, but I wouldn't expect anything less. Would I have preferred that he check himself into the hospital at the first twinge of pain? Yes. Would I prefer that he not retake the field until he's absolutely 100% without a doubt healthy as the day he was born? Por supuesto. Is there anything me or Bruce Bochy or the entire 40-man roster can do to keep him from playing? Not likely. So let it be, Butch. Let it be...

> How sweet was it to watch Matt Cain drive the final nail into the Rockies' coffin, in their own park, no less? Granted, we took our lumps in Saturday's roller coaster loss. But what would a trip to Denver be without some good ol' fashioned Coors Field anguish? And by the time we left town, the Purple People were a deflated bunch — I even heard Dinger was sobbing his eyes out in the clubhouse. Why does it feel good to beat these guys? I posit that the Rockies are becoming one of the Giants' most heated rivals. They'll never overtake Los Doyers for sheer spite and instinctive hatred, but the more Neifi Perez/Ryan Spilborghs/Troy Tulowitzki backbreakers we endure at the hands of these upstarts, the more I want to pulverize their hopes and dreams with every chance we get...

See you at the Cove. Don't forget to follow me on Twitter for live updates from Section 104...
Posted by Butch Husky at 10:51 AM